Honduran voters want to protest the president. Their options are a cast of characters 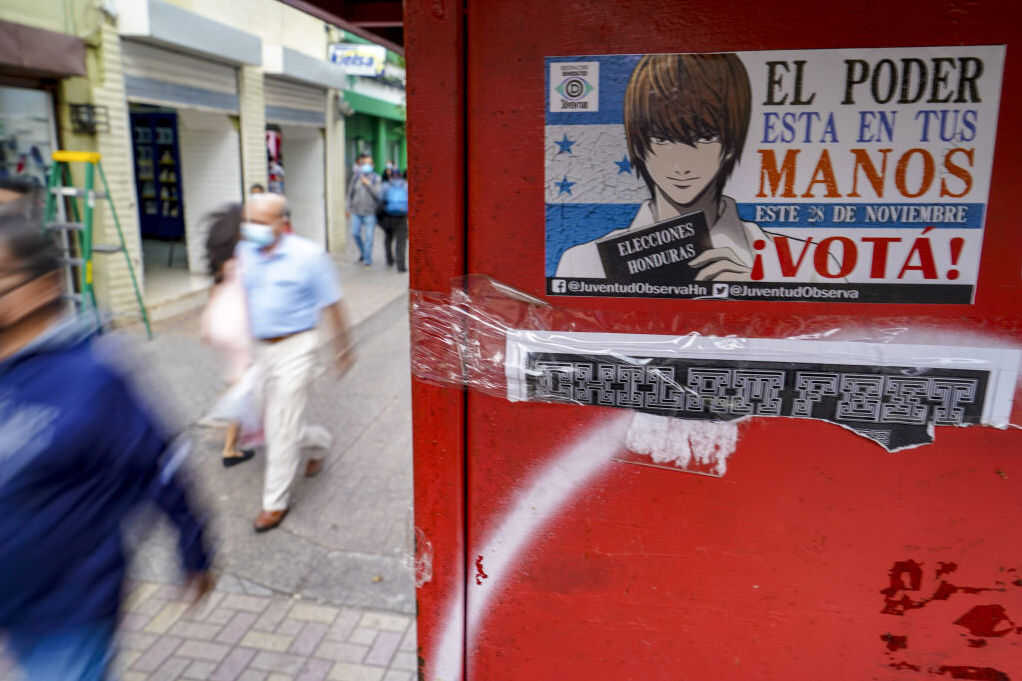 A sticker on a wall in Tegucigalpa, the Honduran capital, invites people to vote in the presidential elections on Sunday. Hondurans will elect a successor to President Juan Orlando Hernandez, who was first elected in 2013.

A colorful cast of characters is on Sunday’s ballot for the next president of Honduras.

The front-runner, one of the country’s former first ladies, is being portrayed as a radical leftist bent on sending the small Central American nation into the arms of Venezuelan and Cuban communists. The ruling party’s candidate is a long-time loyalist who claims he is “different,” although he’s been investigated for embezzling from public coffers. And the man trailing far behind in third place got out of a U.S. prison in time to register to run. He served three years on a money laundering conviction.

“There are no good options,” says Dilisia Carranza, 48, who sells electronics from a small storefront in the industrial city of San Pedro Sula in northern Honduras. She says she’s still deciding, but one thing is for sure. She’ll cast a voto de castigo – or protest vote — against the ruling National Party.

A lot of voters say they’re doing the same. They want to punish the current National Party, which has been in government since a coup in 2009. Their ire is especially directed at the president of the past eight years, Juan Orlando Hernandez.

Hondurans have suffered 8 years of economic ruin and corruption

Hernandez was first elected in 2013 and then again in 2017 after maneuvering a change to the Honduran constitution to allow for his reelection. The country has been on a downward spiral ever since, according to Gustavo Irias, who heads the Center for Democracy Studies in Honduras.

“These elections can turn a page from this backward slide in everything from human rights, the rule of law and our democracy,” he says.

Corruption has skyrocketed in the country. U.S. prosecutors in a case in New York federal court implicated Hernandez in illicit operations tied to drug trafficking. The allegations, which he denies, came out in the prosecution of Hernandez’s brother, who was recently convicted and sentenced to life in a U.S. prison.

An anti-corruption group in Honduras says 70% of legislators also on Sunday’s ballot have faced allegations of corruption.

Apart from graft, Honduras’s economy has plummeted, hit hard by the pandemic and back-to-back hurricanes. Unemployment and the economy are top on the minds of voters.

Araceli Mejia Alvarado is a single mom. She says she lost her housecleaning job at the beginning of the pandemic and hasn’t been able to find steady work where she lives in northern Honduras. She says times just keep getting tougher.

“You feel it, there is so much more instability, poverty, and crime,” she says. She says she won’t vote for the ruling National Party either, adding that she doesn’t have faith in democracy anymore, just God.

Hondurans have the lowest support for democracy in Latin America today, recent polls have found.

Xiomara Castro, 62, is currently leading polls, especially after uniting the opposition under her candidacy. She is married to Mel Zelaya, the former president removed from office by the military in 2009. Castro hasn’t been seen in public with her husband as she had been in previous runs for office.

The opposition depicts her, and Zelaya, as communists who will ally the country with Venezuela and Cuba. And they charge that Zelaya was accused of taking bribes back when he was in power. 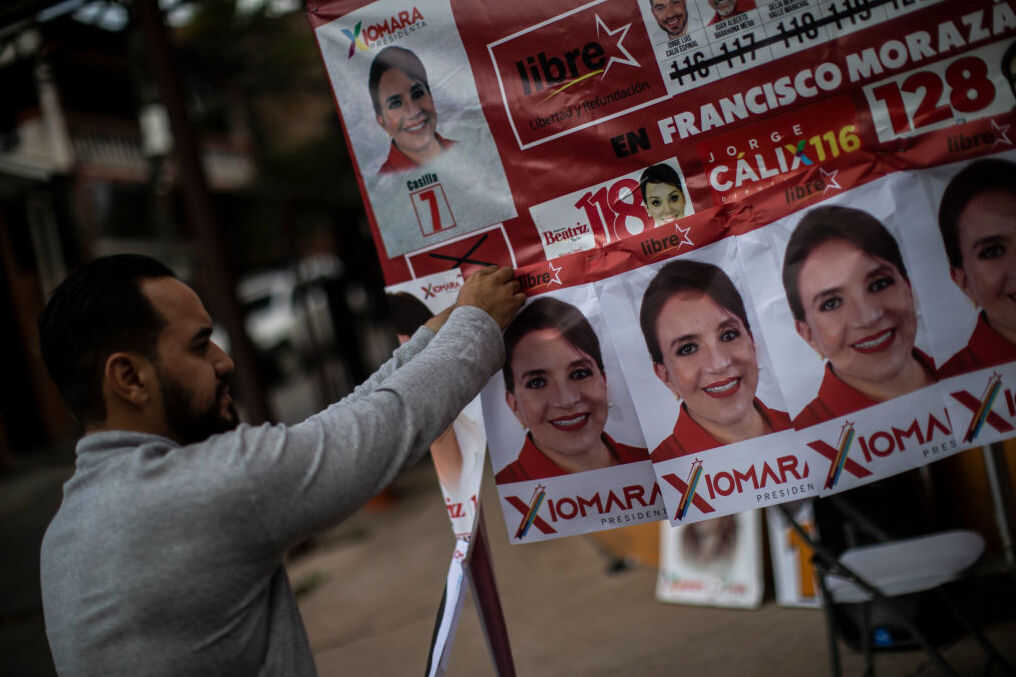 At a recent rally in Tegucigalpa, the Honduran capital, Castro told supporters she will “end the pain and suffering endured by the Honduran people.”

She’s pledged to alleviate poverty and plans to reestablish an internationally backed anti-corruption commission. She also has mentioned limited decriminalization of abortion and embarking on diplomatic ties to China.

But the ruling party’s largesse is tough to beat

Although the ruling National Party is trailing in the polls, support for the current government is still significant, especially since it is good at distributing state funds effectively.

“That’s how the National Party has stayed in power, by creating fear, staying united and using government resources,” says Eric Olson, a Central American expert at the Seattle International Foundation.

Critics say that largesse has shown up in the form of refrigerators, TVs and cash right before the elections. In the poor San Pedro Sula community of Rivera Hernandez, National Party supporters set up a voter information tent in front of a polling place. Wendy Mejilla, a 29-year-old mother of two, says without a recent bono, or government payment, she wouldn’t have been able to feed her kids.

“No other party has ever given me anything, just the blue party,” she says, referring to the National Party.

Its candidate, currently second in polls, is the two-term mayor of the capital Tegucigalpa, 63-year-old Nasfry Asfura. Despite enjoying the National Party’s campaign machinery, he often distances himself from President Hernandez. At his closing campaign rally, as he always does, he told the large crowd, “Soy diferente” – “I’m different” and if given a chance will work hard and create jobs.

Asfura also has faced corruption allegations. He was accused of siphoning off more than a million dollars in city funds toward personal bank accounts. He denies any wrongdoing. 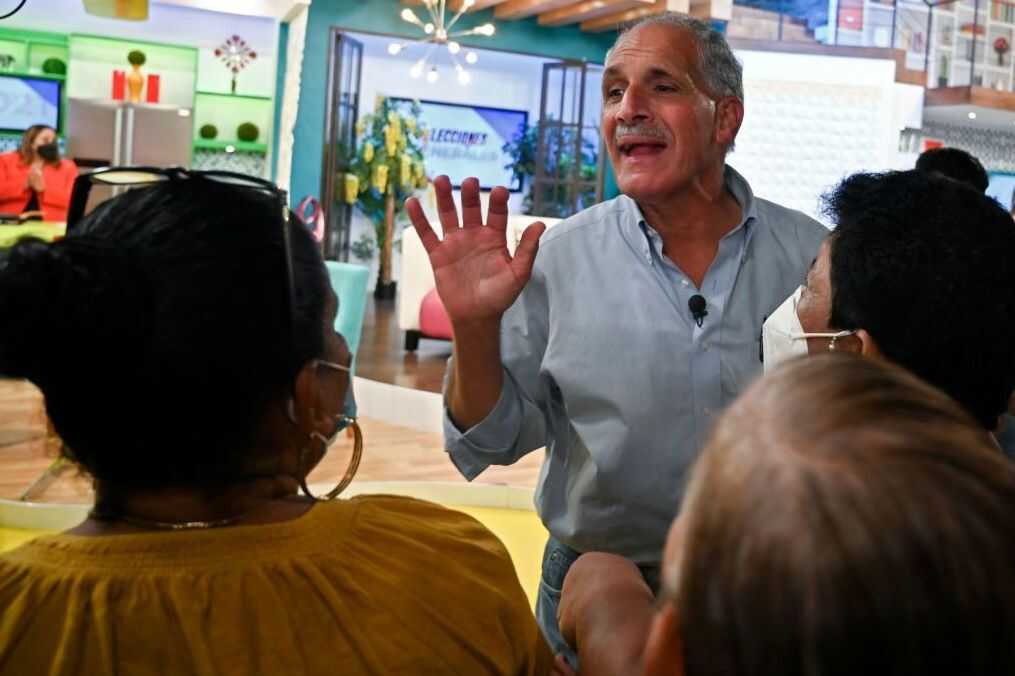 Tegucigalpa’s mayor and presidential candidate for the ruling National Party Nasry Asfura gestures as he takes part in a TV show on Friday.

Running a distant third is Yani Rosenthal, who returned to Honduras in 2020 after his prison time in the U.S. He is from a politically connected family and, despite his history, is pledging to wipe out corruption and use the savings to pay all poor Hondurans the equivalent of $60 a day.

People are worried about a repeat of fraud and electoral violence

Meanwhile, Hondurans are worried about violence if a clear victor isn’t declared in Sunday’s vote. After the 2017 elections, marred by allegations of fraud, state security forces violently shut down demonstrations and more than 20 people died.

New high-tech equipment was supposed to improve this year’s vote count, says Tiziano Breda of the International Crisis Group. But he says preelection testing hasn’t shown the best results. And he adds electoral reforms, to provide accountability and transparency, haven’t been fully implemented.

“We worry that this election presents the main elements for a redo of 2017 and further worsen the country’s political instability and turmoil,” he says. That, he says, could lead to more migration out of the country.

Hondurans have already been leaving their country in droves. Recent figures show a marked increase in the number of Hondurans apprehended at the U.S. southern border in the past year.

Rafael Melgar, a 51-year-old unemployed construction worker, says he’s going to wait for the elections on Sunday but then he plans to head back to Los Angeles where he worked for 14 years as a security guard on Hollywood movie sets.

“It’s very scary living in this country,” he says, sitting outside his small two-room home in a dangerous neighborhood in San Pedro Sula, notorious for gang activity. His elderly neighbors were just robbed, he says, and he can’t find work. He and his family just moved back into their home after they lost everything in the two hurricanes last year. But without work, and all the corruption in the country he says, he’s going to try his luck up north, in the U.S.