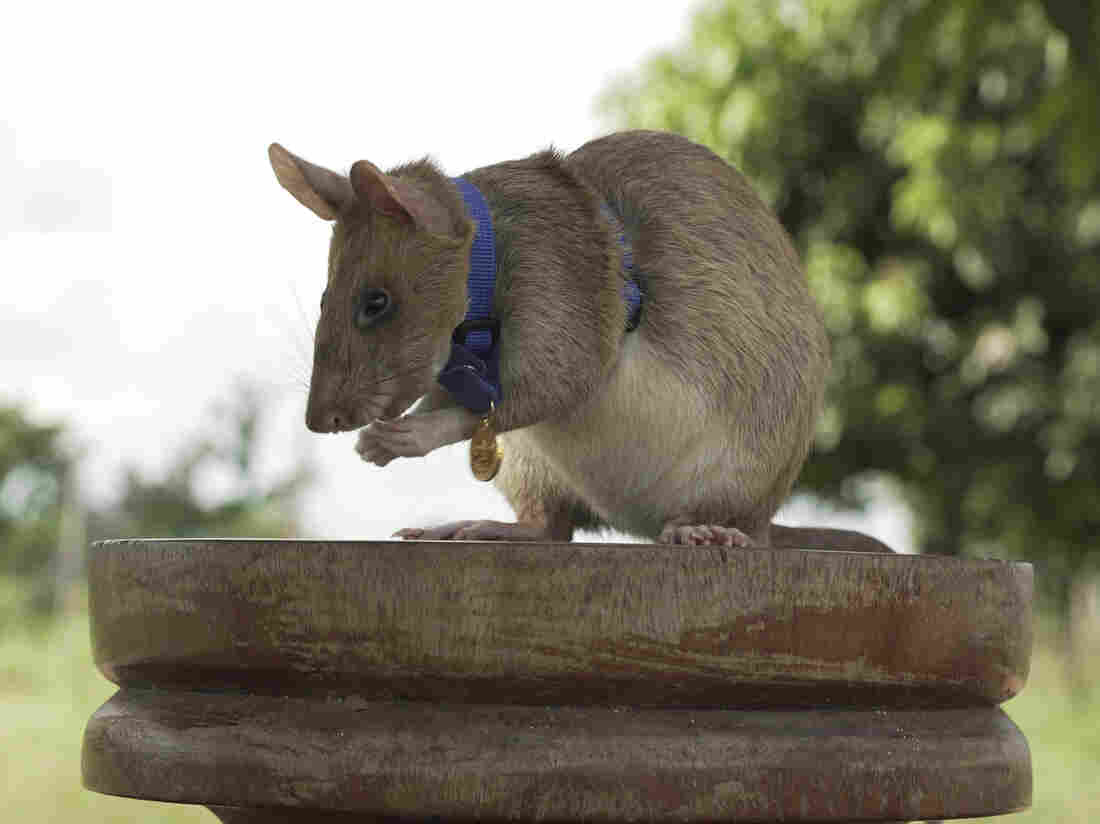 Magawa, a rat that has been trained to detect explosives, was awarded the PDSA Gold Medal on Friday for his bravery in searching out unexploded landmines in Cambodia.

For the first time, one of Britain’s highest animal honors has been awarded to a rat. The animal has detected dozens of landmines in Cambodia and is believed to have saved lives.

Magawa is a Tanzanian-born African giant pouched rat who has been trained by the nonprofit APOPO to sniff out explosives. With careful training, he and his rat colleagues learn to identify landmines and alert their human handlers, so the mines can be safely removed.

Even among his skilled cohort working in Cambodia, Magawa is a standout sniffer: in the last four years he has helped to clear over 1.5 million square feet of land – an area about the size of 20 soccer fields. In the process, he has found 39 landmines and 28 items of unexploded ordnance.

In a virtual ceremony on Friday, the U.K. charity PDSA gave Magawa its gold medal for his life-saving work.

“This is the very first time in our 77 year history of honoring animals that we will have presented a medal to a rat,” PDSA Chair John Smith said during the proceedings.

The group started giving out medals during World War II to reward animals for gallantry in the face of conflict. Previous honorees have included dogs, pigeons, horses and a cat.

Magawa’s medal is perfectly rat-sized, and fits onto his work harness.

APOPO CEO and co-founder Christophe Cox says the organization began exploring new explosive-detection techniques after an analysis found that landmine detection was “the most expensive and tedious part of the problem.”

“That’s why we came up with the idea of using rats, because rats are fast. They can screen an area of 200 square meters in half an hour – something which would take a manual deminer four days,” Cox explained at the virtual ceremony.

Magawa is part of a cohort of rats bred by APOPO for this purpose. He was born in Tanzania in 2014, socialized, and moved to Siem Reap, Cambodia, in 2016 to begin his bomb-sniffing career.

Magawa was honored in a virtual ceremony on Friday.

APOPO uses positive reinforcement methods that give the rats food rewards for accomplishing tasks such as finding a target or walking across a surface. Then they’re trained in scent discrimination: choosing explosive smells over something else, in order to get a food reward.

Though they have terrible eyesight, the rats are ideal for such work, with their extraordinary sense of smell and their light weight – they are too light to trigger the mines. When they detect a mine, they lightly scratch atop it, signaling to their handler what they’ve found.

Their reward: a banana.

Cox says the rats hone their skills in a training field, and are only cleared to begin work once they have perfect accuracy over an 8,600 square-foot area with various stages of complexity.

“We really trust our rats, because very often after clearing a minefield, our teams will play a game of soccer on the cleared field to assure the quality of our work,” he says.

Cox says the rats have freed more than a million people from the terror of living with landmines.

On weekends, the rats get special feast meals. And once their skills wane, they go to a rat retirement home where they get food and play for the rest of their days.

Cox says he hopes the award will bring more attention to the cause that Magawa and his human colleagues are devoted to. “We hope we can solve the landmine problem in the next five to ten years. But it needs the engagement and the support of the wider public.”