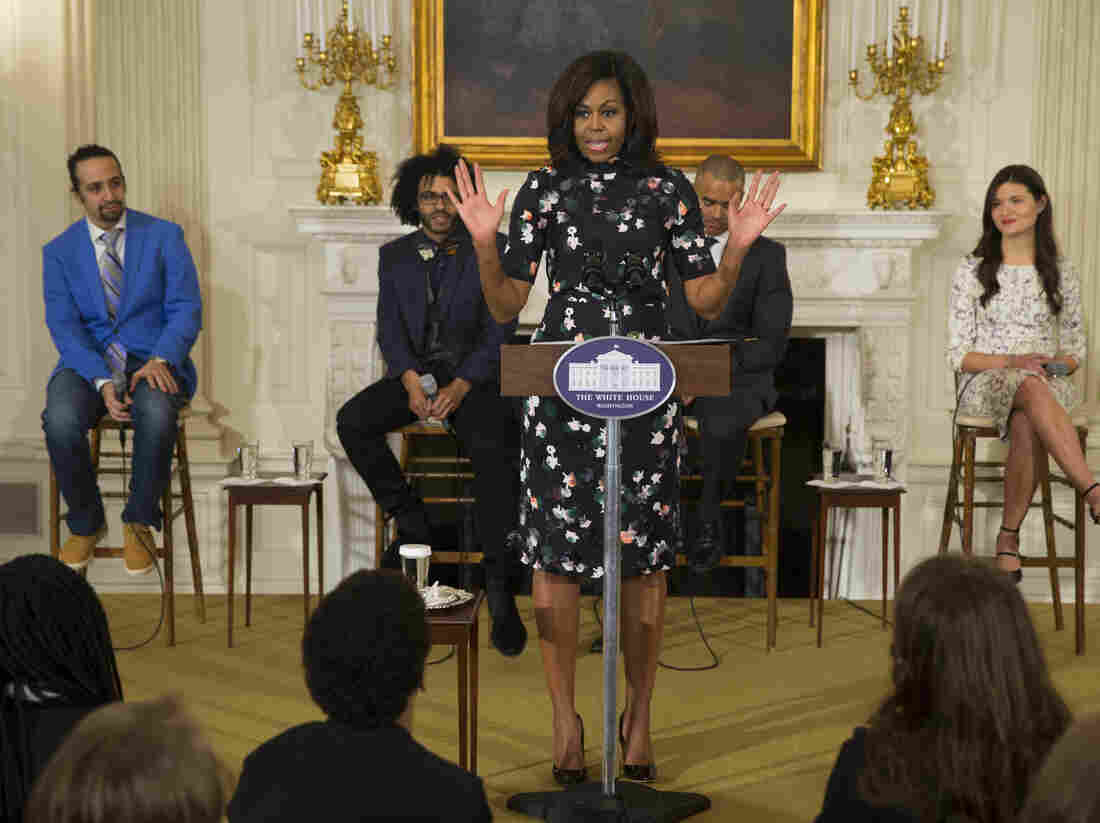 Michelle Obama speaks during a 2016 event at the White House with the cast of the Broadway play “Hamilton.”

In the musical Hamilton, there’s an entire song about the election of 1800 — the contest between John Adams and Thomas Jefferson that marked the first peaceful transfer of power between opposing political factions in U.S. history.

America now is on the cusp of the election of 2020 — and cast members of the hit Broadway show have repurposed some of the show’s soundtrack with new lyrics to promote voting.

Hamilton creator Lin-Manuel Miranda performed the re-imagined songs with roughly a dozen cast members as part of a virtual voter turnout event hosted by former first lady Michelle Obama and the nonprofit group When We All Vote.

The group, co-chaired by Obama, Miranda and other celebrities, launched before the 2018 midterms with the aim of boosting voter turnout among young voters and people of color. Tuesday’s Hamilton public service announcement was part of a larger lineup of conversations and performances to mark National Voter Registration Day and designed to target the youth vote.

Instead of unfurling the biography of Alexander Hamilton and the Founding Fathers, the new lyrics are packed with messaging about voter participation — laying out the stakes and the nitty-gritty of casting a ballot.

“Alexander Hamilton,” the show’s opening number, is reworked to center on “Ordinary Citizen” and tells the story of voter turnout in recent elections — and the people who stayed home.

“A third of us weren’t willing to choose a direction and 80,000 voters across three states was all it took to swing the whole election,” actor Daniel Yearwood, a member of the current Broadway cast, sings about the 2016 election.

Mandy Gonzalez, who plays Angelica Schuyler in the Broadway production, picks up the history with the 2018 midterms.

“Then the midterms came and isn’t it a shame,” she sings. “A quarter of young people let the election go right past them. They might have made a difference — but the registration deadline came and went and some didn’t register because no one asked them.”

The song “Aaron Burr, Sir” now details how to register and ways to vote — early, in person or by mail. The song “Guns and Ships” turns the “Hamilton” refrain into a chorus of “vote by mail.” And “The Election of 1800” lays out the importance not of the contest between Adams and Jefferson, but instead, the current election that’s just a few weeks away.

“Our nation is asking to hear your voice because November is coming and so is your choice,” Miranda sings. “Now, I’ve said this before and it matters a lot. Do not throw away your shot. I know it takes time. It’s a sacrifice. … If you’re hearing my voice you know what to do. My future depends on this. Yours does too.”

The group When We All Vote has been looking for inventive ways to reach young voters, particularly as the pandemic has stopped many in-person voter registration drives or celebrity-studded rallies that have been the hallmark of youth voter outreach efforts in past elections.

“Young people are a very powerful bloc of voters, and they could really change the course of this country if they all voted,” Stephanie Young, the group’s chief officer for communications, culture and media partnership, recently told NPR.

According to the Brookings Institution, millennial and some Generation Z voters make up about 37% of eligible voters but have traditionally had a lower propensity to turn out than other groups.

At the end of the clip released Tuesday, Obama seems to acknowledge that viewers who are logging on to watch a voting-themed Hamilton feature might not be the voters who are skipping out on Election Day — and encouraged them to remind friends and family of what’s on the line this fall.

“I know that you all understand that,” she said. “Let’s make sure that everyone in our community does, too.”