Gun Control Is Front And Center In Virginia Races 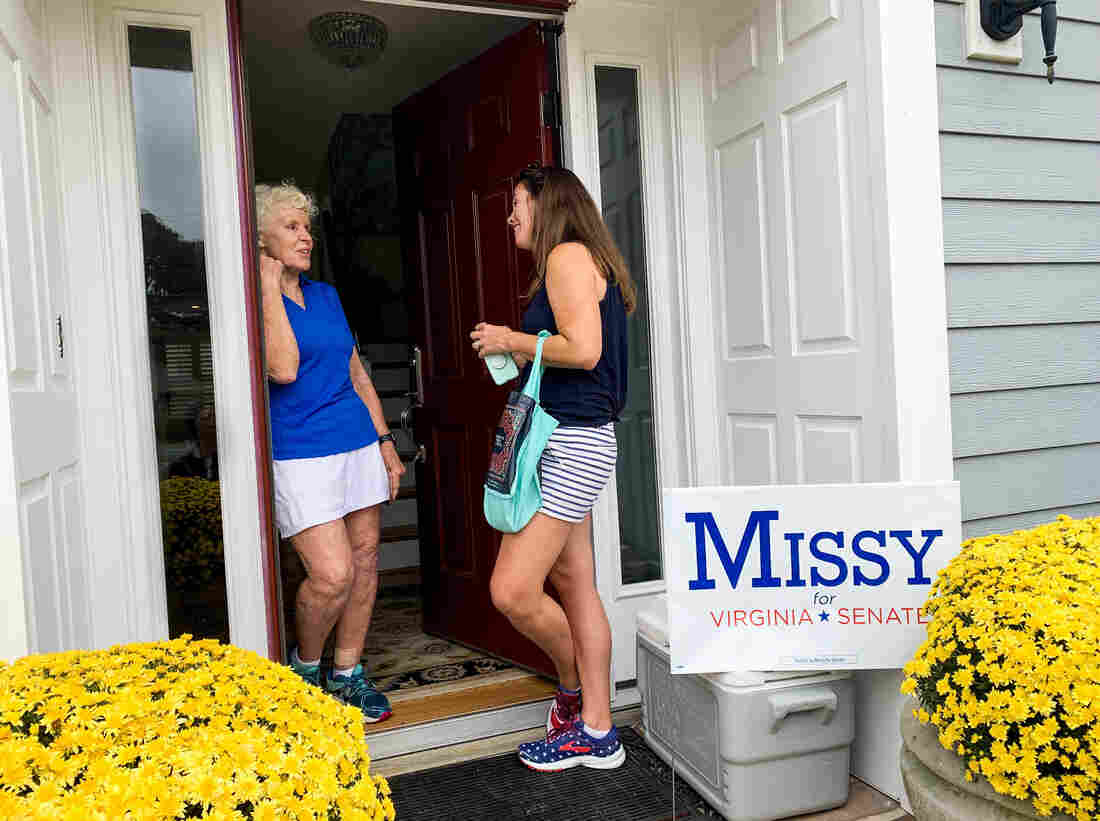 Canvassing for votes in Virginia Beach, Democrat Missy Cotter Smasal meets voter Mildred Manger. “It’s just stupid that everybody has to have a gun,” Manger says. “I mean give me a break!”

Gun control has emerged as a key issue in next month’s off-off-year elections in Virginia, a state that is seen as a bellwether of what could be to come in national elections in 2020.

Republicans currently hold a razor-thin majority in both houses of the state legislature, and with all 140 seats on the ballot this year, Democrats hope to flip those chambers blue.

One race where the discussion of guns is especially fraught is in Virginia Beach, the 8th State Senate district.

Virginia Beach was the scene of a mass shooting on May 31, when a longtime city employee stalked through a municipal building armed with two .45-caliber pistols, killing 12 people and wounding four others before he was killed in a gun battle with police.

That crime has amplified the debate over gun laws as the campaigns head into the final weeks before the Nov. 5 election.

The race in the 8th Senate district in Virginia Beach pits two U.S. Navy veterans against each other. 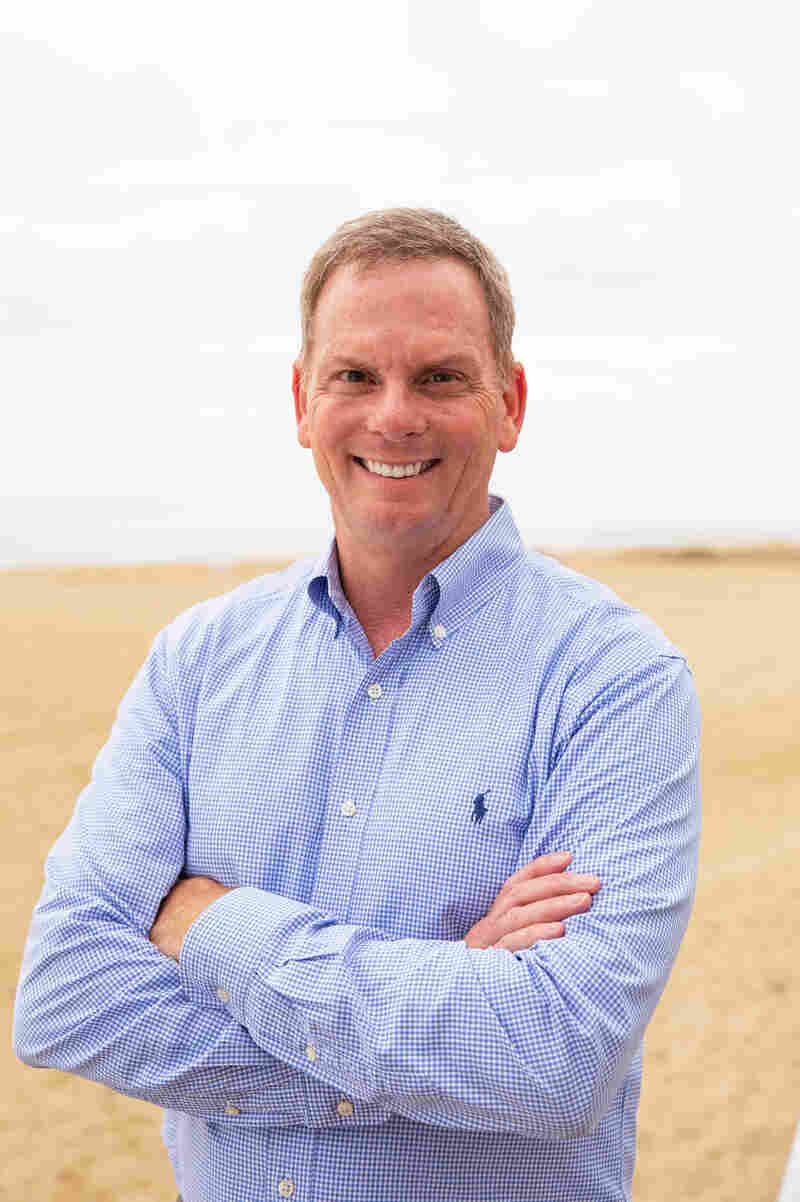 Friends of Bill DeSteph for Senate

Friends of Bill DeSteph for Senate

Cotter Smasal served as a surface warfare officer in the Navy before opening an Italian ice shop in Virginia Beach.

DeSteph was a naval special-warfare intelligence officer, who later served on the Virginia Beach city council and in the state House of Delegates.

Four years ago, DeSteph won his Senate seat handily, beating his challenger by 18 points. But this year, Democrats — bolstered by large cash infusions from gun control groups — think they have a good chance of unseating him.

With the city’s mass shooting fresh in mind, Cotter Smasal is campaigning hard on gun control.

Last week, she began airing a TV ad that features Karen Havekost, who worked in the building where the shooting took place.

“I walked out of the bathroom, I saw the gunman on the other end of the hallway, and I saw a coworker in the middle, and he looked at me and he yelled, ‘Go!” Havekost says in the ad.

Havekost goes on to fault DeSteph for protecting gun rights.

“He blocked the Senate from even voting on gun safety laws,” she says in the ad. “He has a chance to make a difference, but he refuses to do it.”

Within a couple of days, DeSteph hit back with a response ad.

“Missy Cotter Smasal is using our local tragedy for her political gain. It’s shameful,” the narrator says. “A veteran, Bill DeSteph is the only candidate who will defend our Second Amendment rights.”

DeSteph is a gun collector and a licensed firearms dealer. He declined to be interviewed for this story, but sent a statement that says, in part, “My opponent has a lot to learn about our community if she thinks that voters will be fooled by her attempts to gain a political advantage from this tragedy.”

In July, weeks after the mass shooting, DeSteph spoke at an NRA town hall meeting in Virginia Beach that was closed to the media.

Afterward, in a video that was posted on an NRA Facebook page but has now been taken down, DeSteph urged NRA members to call their elected representatives: “Tell all of ’em there’s no level of legislation that they can present that would have stopped what happened here.”

The week after that NRA meeting, Democrats were outraged when Republican legislators shut down a special session of the Virginia General Assembly after just 90 minutes. 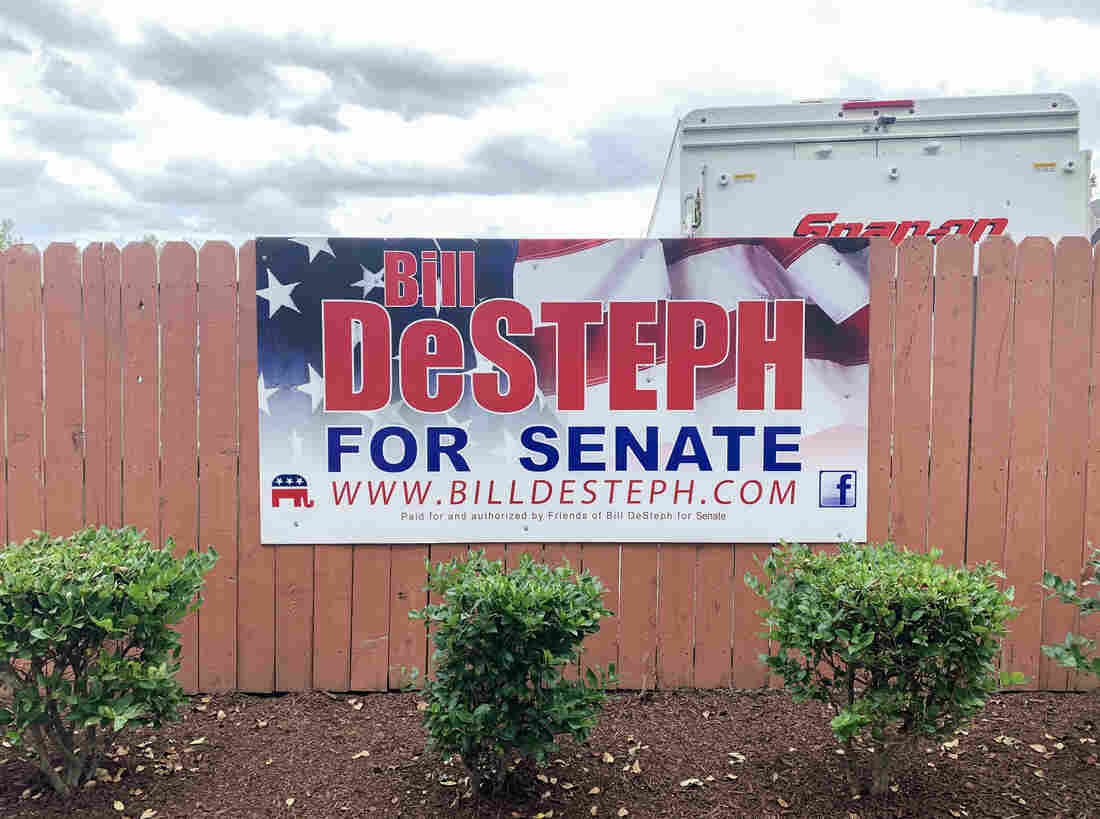 Campaign poster for Republican Bill DeSteph, the incumbent state senator, who is seeking his second term.

Virginia’s Democratic governor, Ralph Northam, had called the session to consider a package of gun control bills, including universal background checks and a red flag law.

Instead, on a party-line vote, Republicans voted to adjourn until after the November elections. They asked the Virginia State Crime Commission to examine the Virginia Beach shooting and report back with recommendations.

A few weeks later, right after the mass shootings in El Paso and Dayton, DeSteph appeared on the John Fredericks Show, a conservative talk radio program, and warned against what he called a “knee-jerk reaction” to mass shootings.

“This isn’t a gun control issue,” he said. “This is a mental health issue.”

“What’s gonna work the best?” he said. “Is it more discipline in schools? Is it more fathers in the families? I don’t know…. I don’t think there’s one type of thing that will work here.”

DeSteph’s views align with those of Virginia Beach resident Bruce Johnson, a retired Naval officer who’s a gun owner and an NRA member.

“The NRA is a polarizing organization. I get it,” he says. But when it comes to gun violence, Johnson echoes DeSteph: The problem, he says, isn’t the firearm. It’s what he calls “broken people.”

“Sen. DeSteph is absolutely on point with his message,” Johnson says. “We’re in a world of hurt if he doesn’t win.”

For her part, Cotter Smasal says her push for tighter gun laws is right in step with the views of Virginia voters.

Pausing for an interview as she canvassed last week in a wealthy Virginia Beach neighborhood, Cotter Smasal said, “People like Bill DeSteph and the gun lobby really try to bully people into silence so that they can continue their agenda. And we’re not going to be bullied by them. We’re going to stand up for what’s right, for what the people here in Virginia Beach want, for what Virginians across the Commonwealth want, and that’s commonsense gun violence prevention.”

That view was clearly shared by resident Mildred Manger, who greeted Cotter Smasal’s door-knock with an enthusiastic, “Oh! I’ve been seeing your signs everywhere,” and agreed to take a sign for her front yard. 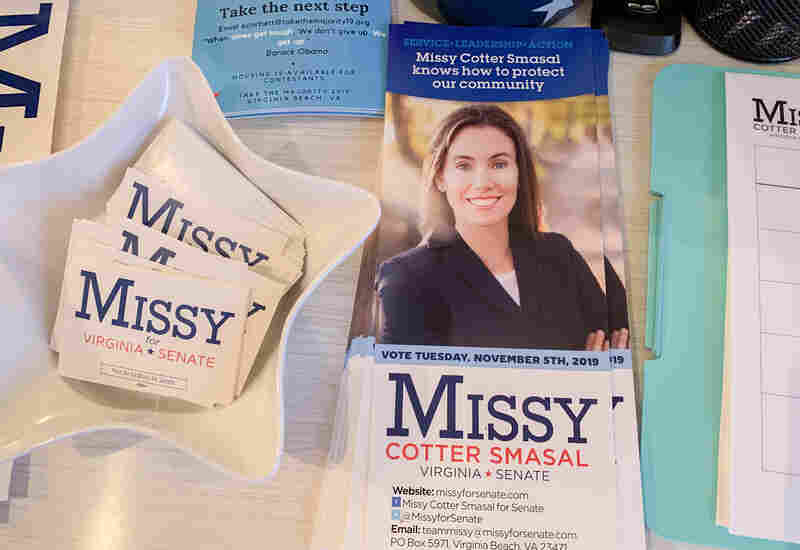 Manger nodded. “It’s just stupid that everybody has to have a gun!” Manger said, her voice rising. “Give me a break. I mean, how could anybody not focus on this? Just don’t get me going,” she said. “It’s just bad.”

One sign of how bullish gun control groups are about their prospects in Virginia is that they’re outspending the NRA on these state races, by about 10:1.

According to Federal Election Commission data, the NRA has invested about $300,000 in Virginia races this year.

By contrast, the group Everytown for Gun Safety, founded by former New York City Mayor Michael Bloomberg, has funneled more than $2.3 million into Virginia races to date, and has pledged to spend at least another $200,000. More than $200,000 from Everytown has gone directly to Cotter Smasal’s campaign.

This week, Giffords PAC, the gun control group founded by former congresswoman Gabby Giffords, who survived an assassination attempt in a mass shooting in 2011, launched a $300,000 ad buy supporting Democratic candidates in Virginia.

But the chairperson of the state Republican Party, Jack Wilson, sounds undaunted. In an interview in his Richmond, Va., office, Wilson says he knows the Virginia electorate well, and he’s not worried.

“This isn’t the first year that the folks that want to grab Virginians’ guns have come into the Commonwealth and spent money on it. So we’re not surprised by that,” Wilson says. “And I think when we get down to it, the voters of Virginia aren’t ready to turn into California or New Jersey.”

Echoing that view, the executive director of the NRA Institute for Legislative Action, Jason Ouimet, said in an emailed statement:

“Anti-gun organizations are backed by distant billionaires, not local interests. These elitists funnel money into our communities to prop-up weak candidates defined by one trait: their willingness to bow to the billionaire’s gun control agenda, even if it turns great places — like Virginia — into New York City.”

But talk to local volunteers with the grassroots gun control group Moms Demand Action, and they point to a palpable shift in public opinion since the mass shooting in Virginia Beach. 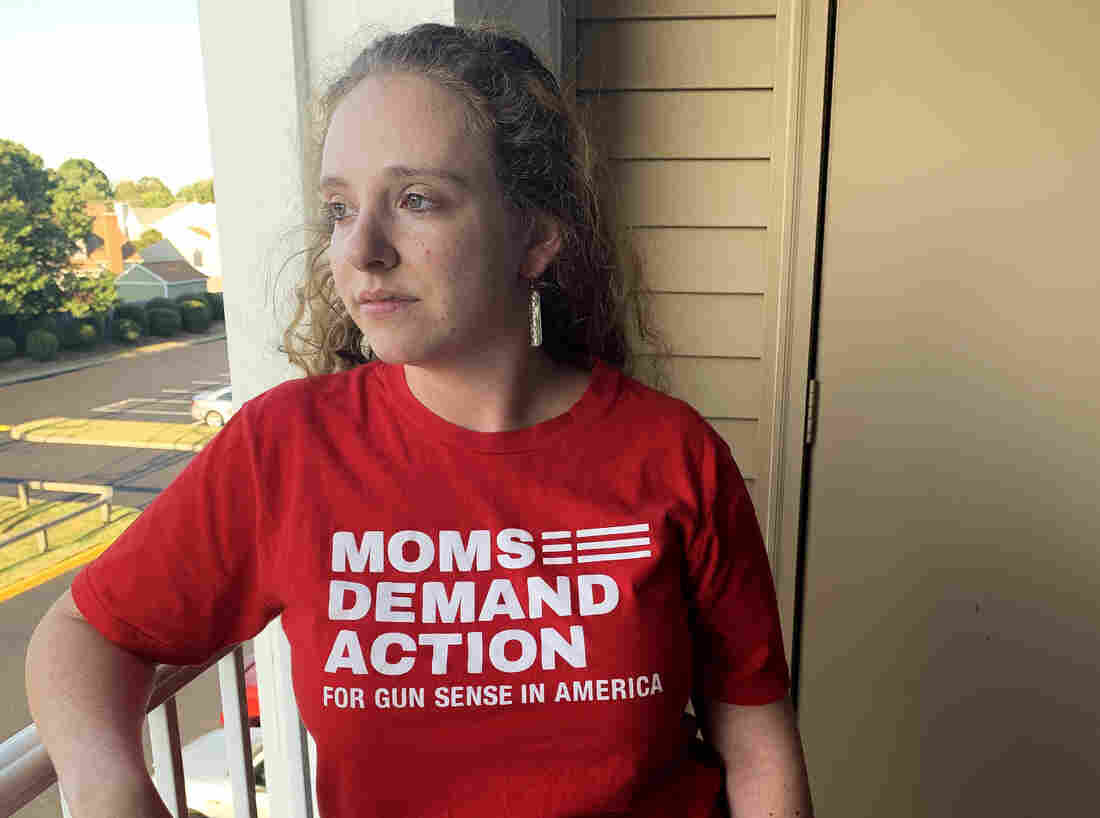 Allison Graves’ husband barricaded himself in his office while the mass shooting rampage unfolded outside the door. “When it happens, it forever changes you,” she says. “The activism is a part of healing.”

Allison Graves, a third-grade teacher, says as she’s gone door to door canvassing for those endorsed by the group as “gun sense candidates,” she’s heard something new: people who say they didn’t think too much about gun control before, but they do now.

“I see some people who would never be political coming out and saying, ‘Something’s got to change,'” Graves says.

Graves’ voice quavers as she thinks back to May 31, the day of the shooting. She was wrapping up her teaching day when she received two texts from her husband.

The second text followed immediately, and made her heart stop: “There’s an active shooter in our building.”

It was 14 agonizing minutes before Allison heard from her husband again.

He had managed to barricade himself in his office and hide under his desk as the rampage unfolded just outside the door. He knew nearly all of those who were killed.

“When it happens, it forever changes you,” Graves says, noting that the personal toll of that mass shooting has driven her to become even more involved with Moms Demand Action.

“The activism is a part of healing,” she says. “Something has to be done, and I can’t sit on the sidelines.”

Two of Graves’ fellow Moms Demand Action volunteers, Marian Kiehl-Kearney and Karen Havekost, who is featured in Cotter Smasal’s recent ad, take umbrage at DeSteph’s claim that his opponent is “exploiting” or “politicizing” the local tragedy in her campaign. 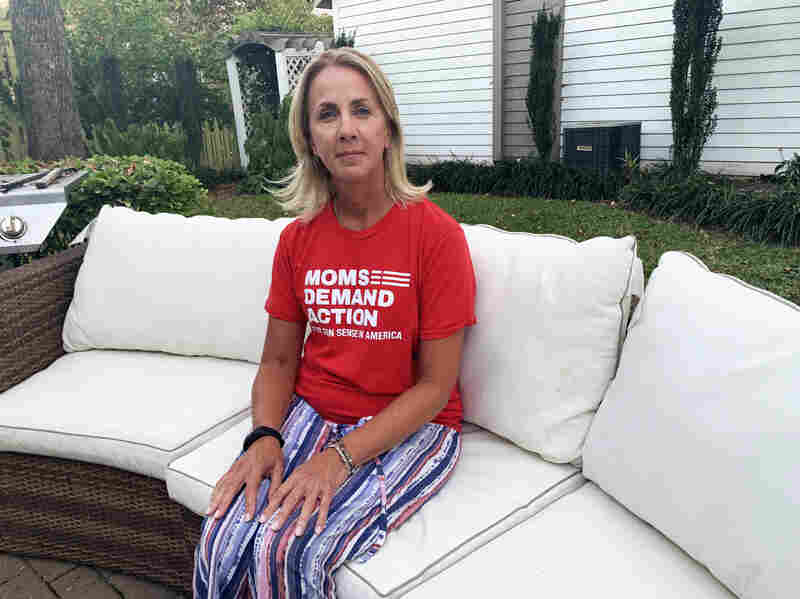 Karen Havekost, a retired city worker, was able to flee Municipal Building 2 during the mass shooting on May 31. She’s featured in a TV ad for Democrat Missy Cotter Smasal, and advocates for gun law reform in Virginia. “This is the perfect time to say we have a problem. We can change it.”

The 8th District in Virginia Beach, with a sizable military presence, tilts Republican.

Donald Trump won here by nine points. But the district has also gone for Democrats in races for governor and the U.S. senate.

If Missy Cotter Smasal manages to defeat Bill DeSteph on Nov. 5, political science professor Quentin Kidd of Christopher Newport University says he’ll give credit to two things: the issue of guns, and a surge of mobilized and energized women voters.

That trend, he says, would have implications well beyond Virginia Beach.

“If she beats Bill DeSteph, in my mind it would be a big signal to candidates across the country, especially in these suburban areas — you know, the suburban Phillies, the suburban Kansas Cities, the suburban Clevelands — that you can use the issue of gun control and you can win on it,” Kidd says.

That would herald a major political shift.

“It wasn’t so long ago where a Democrat was afraid to talk about gun control because it was gonna punish them in a big way,” Kidd says. “It would be a sea change.”