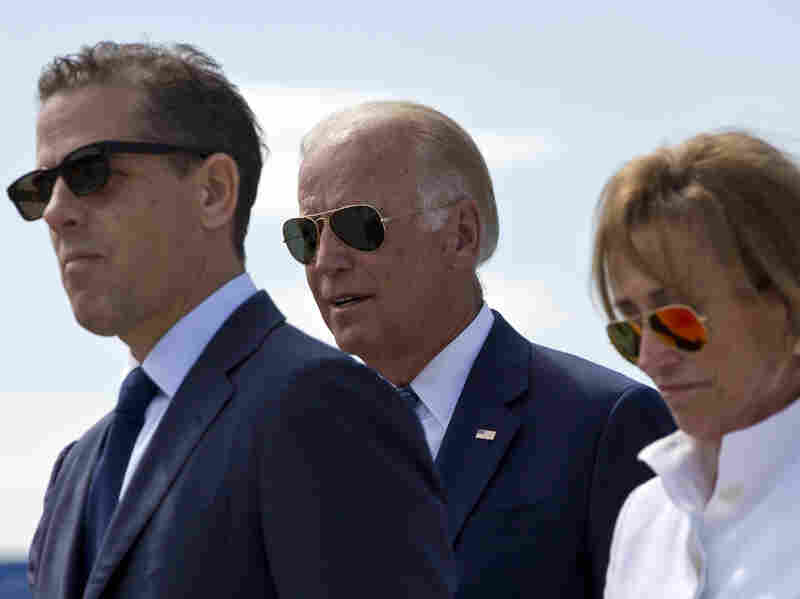 Joe Biden, center, his son Hunter Biden and his sister Valerie Biden Owens in 2016. Hunter Biden is the subject of a new GOP report.

Hunter Biden’s position on the board of a Ukrainian energy company was “awkward” and “problematic” at the time his father, Joe Biden, was serving as vice president, two Republican-led Senate committees say in a new report — but the study does not show that it influenced U.S. government policy.

The long-awaited Republican report appeared six weeks ahead of the presidential election. Democrats have dismissed it as a politically motivated effort to try to hamper Biden’s 2020 campaign in the race against President Trump.

The report’s authors, Sens. Ron Johnson, R-Wis., and Chuck Grassley, R-Iowa, say the American public has a right to know about what they call any wrongdoing or conflicts of interest during the Obama administration.

The 87-page report they produced focuses on Hunter Biden’s position on the board of Burisma, a Ukrainian energy company widely considered corrupt.

Trump’s efforts to get Ukraine to launch an investigation into the Bidens and Burisma were a key part of Trump’s impeachment; the White House froze military assistance authorized by Congress for a time as it tried to extract concessions in Kiev, then ultimately released it.

No Ukrainian official ever went through with the announcement that Trump wanted about a putative investigation into the Biden family. Democrats in the House impeached Trump over the matter. Republicans used their majority in the Senate to acquit him.

While Johnson and Grassley’s report raises concerns about a possible conflict of interest arising from Hunter Biden’s position on the Burisma board, it concludes that “the extent to which” his role “affected U.S. policy toward Ukraine is not clear.”

It does argue that the younger Biden’s position made it “awkward” for American officials who were pushing an anti-corruption line in Ukraine.

American diplomatic engagement in Eastern Europe increased after Russia’s military incursions there and part of the efforts by Biden and other American officials were to wring out decades-old Soviet-era corrupt practices in portions of a reforming Ukraine eager to face West and join the modern European community.

Critics said the Bidens’ situation undercut the American case. Although the story has embarrassed Biden and his camp, prosecutors in Ukraine have concluded no laws were broken.

The report also accuses other members of the Biden family of cashing in on Joe Biden’s vice presidency.

Biden’s campaign dismissed the report as a political attack and an attempt by the report’s Republican authors to help distract from what a Biden spokesman called Trump’s failure to control the coronavirus crisis.

The Republican-led committees’ investigation has been dogged by allegations that it has acted, wittingly or unwittingly, as a means of disseminating Russian disinformation. The report’s authors rejected those claims, and say the vast majority of their investigation is based on U.S. documents and interviews with witnesses.

Johnson has said he did not use material from a Ukrainian member of parliament sanctioned by the United States for what it called his role in an election interference scheme.