Goat Sales For Eid Were Tanking Due To The Pandemic. So Marketers Got Creative 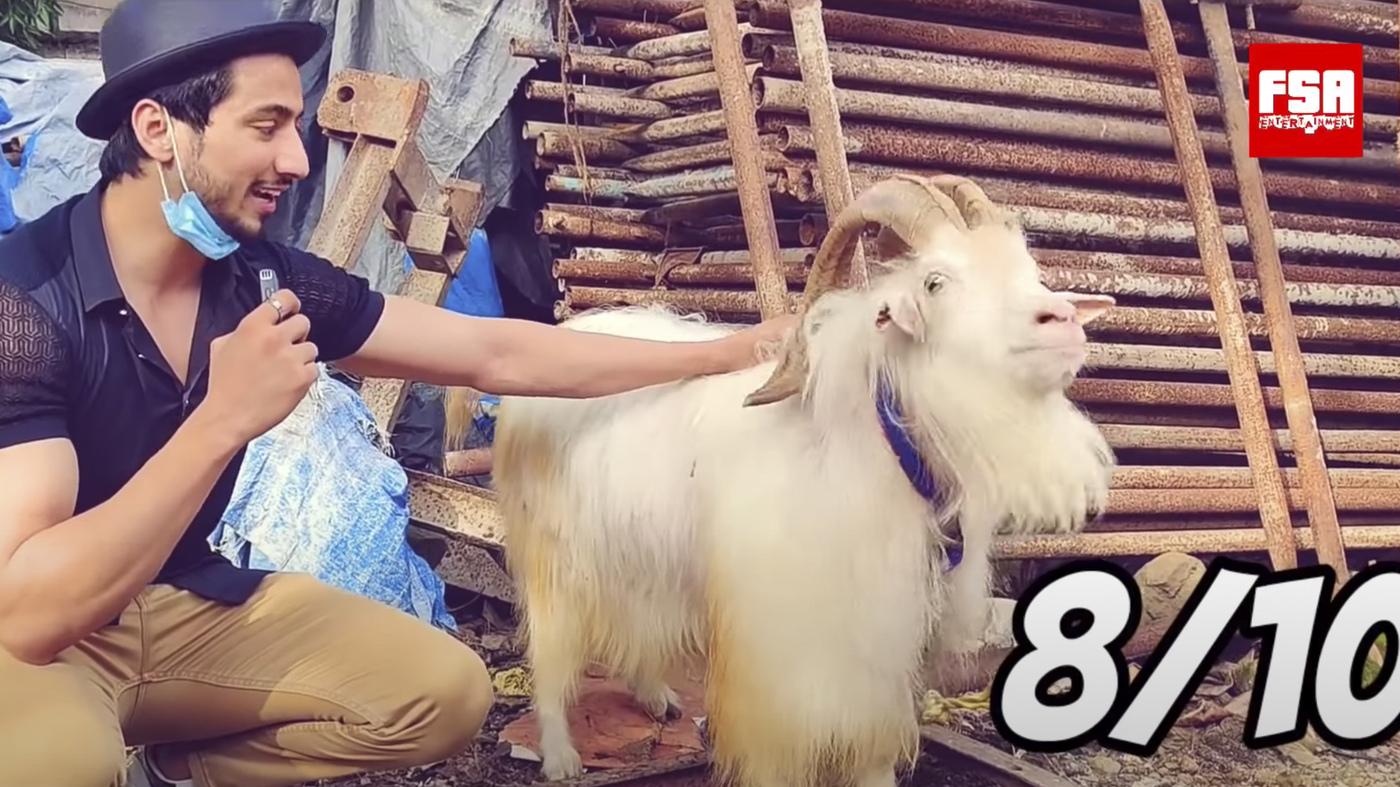 The video clip shows a beauty pageant of sorts — but no contestants are promising world peace.

“I look for beauty. And aggression. Things that stand out in a crowd,” says judge Faisal Sheikh in the video. Also known as Mr Faisu 07, he is a TikTok star and an Instagram influencer based in Mumbai.

Ninja and Heera are goats at Bakra Mania, a goat market in Mumbai. “The goat farmer thought a TikTok star could help sell his goats,” says Fahad Zariwala, who shot the video with Sheikh for his YouTube channel, FSA Entertainment. The channel showcases many goat gems like “India’s Cutest Butcher,” “Goat Queen” and “Most Expensive Goat.”

Bakra Mania is lucky. With the help of Sheikh and his 13 million Instagram followers, all of the market’s goats sold.

It’s not been easy for goat dealers in India these days. Much of the country is under lockdown because of COVID-19 — and the market has tanked. Customers aren’t able to come out and shop, and because the shutdown has affected jobs, people are struggling economically.

But farmers and dealers across India are finding creative ways to drum up sales, whether it’s selling animals online or hyping their wares on social media — especially now that it is Eid al-Adha. The four-day Muslim holiday begins on July 31 and is celebrated traditionally with an animal sacrifice, or qurbani in Arabic.

India is home to over 180 million Muslims. Families who can afford to do so will typically buy a goat or other animal to slaughter. The meat is then divided equally among family, friends and the poor. It symbolizes the Prophet Abraham’s willingness to sacrifice his son for the will of Allah in the Koran.

In the weeks leading up to Eid, straggling lines of goats are usually seen ambling down the city streets heading to abattoirs and livestock markets. But this year, in an effort to maintain social distancing as COVID-19 rates skyrocket in densely populated cities like Mumbai, the government has put some measures in place to keep the virus in check.

In early July, Mumbai’s state government announced that goats can only be sold online — and the main abattoir where they are slaughtered has been shut. Truckloads of goats are stuck on the city outskirts because authorities will not give them permission to enter the city. Only a few truckloads of goats are being allowed in, leading to confusion and anger. Meanwhile in Kolkata, big animal markets are shut.

Goats can still be found in illegal animal markets, says H. Zaman, the owner of Imperial Livestock and Agro Farm, a goat farm outside Kolkata. He says in his upscale gated apartment complex in the city, there would be at least 100 sacrifices during Eid. This year, his building complex won’t allow public sacrifice in common areas to prevent disease transmission.

“Last year so many cars lined up outside my farm, local farmers complained their tractors couldn’t get through. If I sold 700-800 [goats] last year, this year I might sell 200,” says Zaman. His goats sell for about $3 a pound. Goats are about 60-110 pounds. A special princely specimen can sometimes top 220 pounds and fetch an astronomical price.

Zaman got into goat farming about five years ago. He wanted to raise goats that were not being force fed and injected to pump up their weight. “We grow our own alfalfa” to feed the goats, he says. “And you can see the difference just in the sheen of their coats.”

Over the past few weeks he has been selling his goats through messages on WhatsApp groups and social media. Customers can come to the farm and pick up the goats — and Zaman says they can also use the space to slaughter the animal.

One of his newer customers is Nadim Amin, the scion of the family that founded one of Kolkata’s famous restaurants, Aminia, in 1929. Normally, Amin would go to the market with his father to select the perfect goat. “I liked Barbari goats, they were small and totally white although a little fatty,” he says.

For Amin, the ability to buy goats virtually via WhatsApp has been a godsend. As a diabetic, he has to be careful about crowds amid a pandemic, he says. He bought three goats from Zaman by looking at pictures over WhatsApp.

Other online goat retailers have also seen some recent success. A Lucknow-based website called Pashubajaar has been selling goats online for the past five years. The site resembles a matrimonial website, with goats listed by breed, weight, gender and number of teeth.

Sanjeev Kumar, founder of Pashubajaar, says he has seen a small bump in sales in the past few weeks, especially in the last 7 days. “With COVID, everything has changed because people can’t go to markets.”

Now he is adding pictures to the profiles of the goats on his website to help with sales. Muslim law dictates sacrificial goats be free from disabilities — and buyers prefer to inspect them personally. The photos will give buyers a better idea of what to expect, explains Kumar, since they cannot check the goats in person.

Kumar sources his goats from a network of some 450,000 farmers across India. After a buyer selects a goat — say a brown-spotted Sirohi with drooping ears or a glossy black Osmanabadi buck with four teeth — they must make a 20% deposit to purchase the animal. The goat will then go through a 10-day isolation period to make sure it is disease-free. Pashubajaar’s drivers then transport the goat to the customer’s doorstep, and the customer pays the remaining fee.

But online purchases for goats are still in the minority, says Kumar. Not everyone has access to a smartphone or a mobile payment system.

In smaller cities in India, goat markets are still open — but sales are expected to be much lower this year. Tarique Anwar, a schoolteacher in Asansol, an industrial city a couple of hours outside Kolkata, says his community, mostly lower middle-class daily wagers, has been hit hard by the lockdown.

“My own father is a daily wage earner,” says Anwar. “Somehow my younger brother and I have managed to get a goat — and inshallah we will perform qurbani and distribute the meat among the poor.”

The pandemic has nudged some in the community to rethink the age-old practice. Politicians this year have floated the idea of a symbolic sacrifice such as donating blood. Or for those who would rather cut a cake than a goat, a bakery in Lucknow sells cakes with pictures of goats on them.

But for Nadim Amin, nothing beats the real thing. This year, he will keep up his family’s tradition — tending the three goats he bought on WhatsApp at home before slaughtering them on the terrace. When I ask him if, as a boy, he ever fell in love with the goats he would bring home, he laughs gently. “That is the idea of qurbani,” he responds. “You have to sacrifice something you love.”

Based in Kolkata, Sandip Roy is the author of the novel Don’t Let Him Know. He tweets @sandipr.