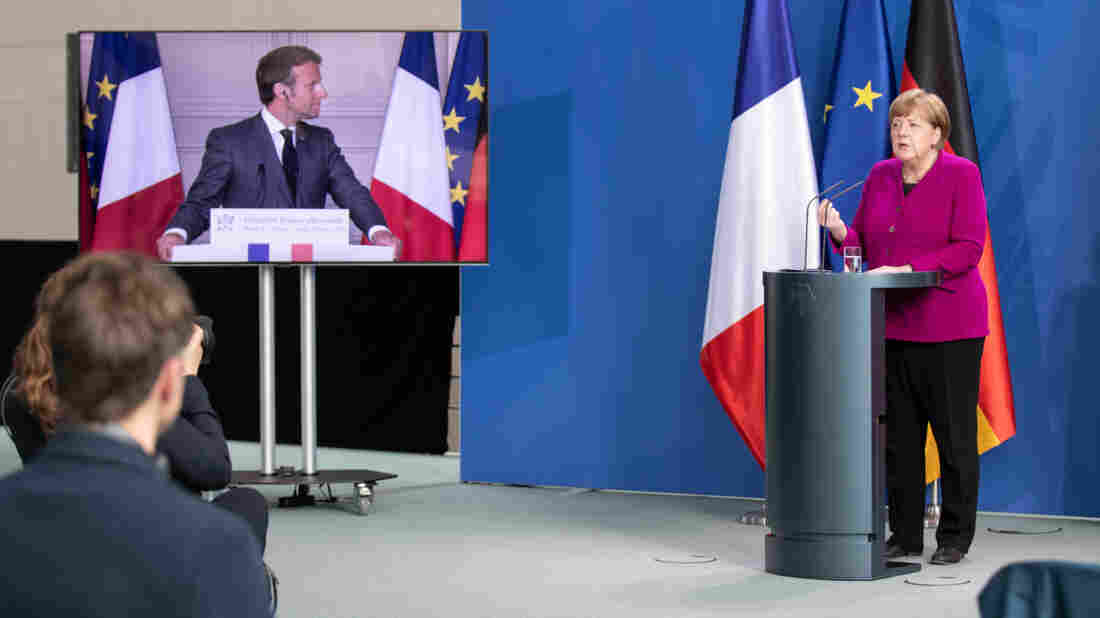 Germany and France have proposed the creation of a fund of 500 billion euros (more than $540 billion) to support the recovery of the European Union’s coronavirus-stricken economies. The fund would add to the more than half-trillion dollars in emergency relief measures the bloc’s 27 leaders signed off on last month.

German Chancellor Angela Merkel and French President Emmanuel Macron unveiled their plan during a joint video news conference on Monday. The 500 billion euros would be raised through EU-backed bonds and be used to help industries and regions hardest hit by the pandemic.

Merkel called the coronavirus outbreak the gravest crisis ever to hit the EU, and she said that bold proposals were needed. Because of the pandemic’s varying impacts across the continent, Merkel called for cohesiveness and solidarity among all EU countries. She said that the current economic challenge “requires this unusual, one-off effort that Germany and France are now prepared to take.”

The money from the recovery fund would be dispersed in the form of grants rather than loans, and repayments would be made from the EU budget over a roughly 20-year period. The question of whether to support Europe’s struggling economies through grants or loans has unearthed an underlying rift between the bloc’s northern and southern countries.

Germany initially objected to the idea of collective borrowing but, recognizing the “unusual nature” of the crisis, chose to take an “unusual path,” Merkel said.

European Commission President Ursula von der Leyen welcomed the proposal. She said in a statement that the plan “acknowledges the scope and the size of the economic challenge” that Europe faces.

But despite the initiative of Europe’s two largest economies, the issue of burden sharing remains controversial among several EU member states.

“Our position remains unchanged. We are ready to help most affected countries with loans,” Austrian Chancellor Sebastian Kurz said in a Twitter post.

Italian Prime Minister Guiseppe Conte described the Franco-German proposal as “an important first step in the right direction along the lines intended by Italy.”

EU leaders last month directed the European Commission to draw up plans for the bloc’s new long-term budget that would also include an economic recovery program through a combination of grants and loans.

EU Council President Charles Michel urged the member states to “work in a spirit of compromise” as soon as the commission presents its budget and recovery proposal.

Members of the European Parliament last week demanded that a recovery package to tackle the pandemic’s economic fallout must be worth at least 2 trillion euros (about $2.2 trillion).

“The goal is for Europe to emerge from the crisis stronger,” Merkel said in a statement.