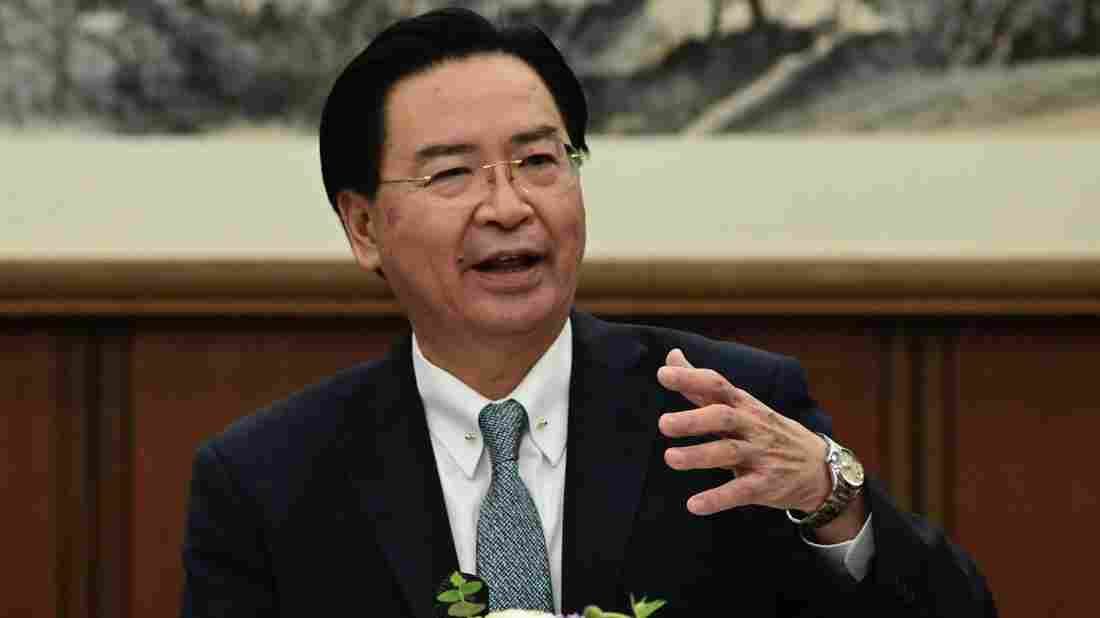 Taiwan’s Foreign Minister Joseph Wu, shown at a news conference last November, says he sees the possibility of closer relations with the U.S.

Taiwan is not pursuing formal diplomatic ties with the United States for now, but there is “a lot” of room to further strengthen relations, Foreign Minister Joseph Wu said in an interview after unprecedented visits by two senior U.S. officials.

In August, U.S. Health and Human Services Secretary Alex Azar traveled to Taiwan, and last week Under Secretary of State Keith Krach visited the island. They were the highest ranking U.S. officials to travel to Taiwan since Washington cut formal diplomatic relations with Taipei in 1979 to establish ties with Beijing.

The visits come against a backdrop of deepening mistrust and sharply deteriorating relations between the United States and China.

“We are not seeking full diplomatic relations with the United States at this moment,” Wu told NPR by Skype on Sunday.

There has already been “tremendous advancement” on those fronts, and he called Krach’s visit “monumental.”

The cozier relationship between Washington and Taipei has angered Beijing.

While Krach was in Taiwan, China ordered dozens of military planes to make forays across the median line that divides the Taiwan Strait, in a bid to rattle Taipei.

Beijing considers the self-ruled democracy a part of China and has vowed to unite the island politically with the mainland, by force if necessary. The Chinese government effectively bans countries from diplomatically recognizing both itself and Taiwan, and has kept Taiwan out of most major multinational organizations, including the United Nations.

Wu said the increase in menacing flights, and Chinese naval incursions into Taiwan-controlled waters, were a concern.

“Crossing into the mid-line of the Taiwan Strait is particularly alarming,” he said.

Taking steps to deepen ties with the United States, including by welcoming senior U.S. officials, was the right choice, he said.

“We see China has become more threatening and they seem to be more capable than before,” Wu said, adding the risk of military action against Taiwan may be elevated due to domestic difficulties in China.

“Taiwan might be an easy scapegoat for the Chinese government, and therefore we understand the possibility for China to think about using military force against Taiwan, and we have been staying vigilant.”

The U.S. government is bound by the Taiwan Relations Act to provide Taiwan “defense articles and defense services.”

The Trump administration last year approved the sale of $8 billion worth of F-16 fighter jets and other kit to Taiwan. Reuters reported earlier this month that the U.S. was planning to sell Taiwan a range of other weapon systems.

Wu said Taiwan hopes the U.S. continues to provide such “defensive articles” to Taiwan, but that the island was not relying on the United States to intervene in the event of a clash with China.

“Taiwan’s defense is our own risk. It’s our own responsibility, and we try to prepare ourselves for the future scenarios,” he said.

Asked if he felt that Taiwan was a pawn in the Trump administration’s larger brawl with Beijing, Wu pointed to U.S. arms sales and bipartisan support for Taiwan.

“We don’t feel that we are being used.”

Taiwan’s relative success at combating the COVID-19 pandemic had raised its profile on the international stage, and that the visits by Azar and Krach were a direct result, Wu said.

Taiwan, with a population of 23 million, has been heralded as a public health model for its coronavirus response. According to the Taiwan Centers for Disease Control, there have been some 500 confirmed cases of COVID-19, and just seven deaths since the outbreak began.

“Many people around the world started asking the question, who will be the next? And I think the conclusion is that Taiwan might be the next,” he said.

Wu said the imposition of the National Security Law and Beijing’s efforts to limit the cultural and religious autonomy of ethnic Uighurs, Tibetans and Mongolians, brought to mind Martin Niemöller’s post-World War II poem “First They Came…” Its verses lament the silence of German society in the face of Hitler’s rise to power and his regime’s attacks on different political and religious groups.

“If you look at this historical lesson of the victims of the Nazis, I think we might be going through the same issue,” Wu said.