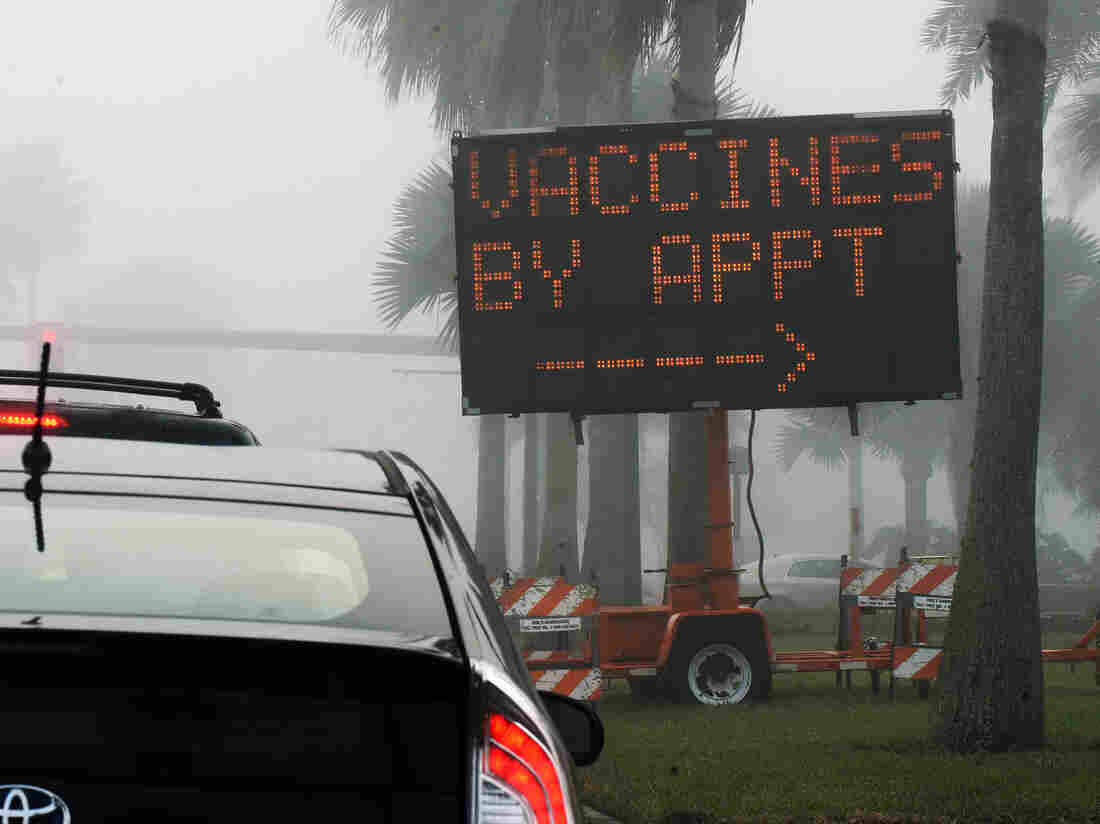 A sign directs drivers to a COVID-19 vaccination site at the Orange County Convention Center in Orlando, Fla. Health officials in Orange County said on Thursday that two women under the age of 65 were caught dressing up as “grannies” in an effort to cut the vaccine line.

Two Florida women disguised themselves as elderly grandmothers in an unsuccessful attempt to get their second doses of the COVID-19 vaccine, officials said Thursday.

Dr. Raul Pino, the director of the Florida Department of Health in Orange County, told reporters that the women were caught dressing up as “grannies” — “the bonnets, the gloves, the glasses, the whole thing” — at the vaccination site on Wednesday. He said he was not sure how they had managed to get their first doses, but noted the community’s high demand for vaccines.

“We haven’t had any lack of willing arms to get vaccinated,” Pino said. “We also have people faking to be old to be vaccinated.”

The Orange County Sheriff’s Office told NPR over email that the women’s ages are 34 and 44. Florida is currently prioritizing vaccinations for adults 65 and older, healthcare personnel and long-term care facility residents and staff.

The dates of birth on their driver’s licenses did not match those they had used to register for the vaccines, though their names did, according to the Sheriff’s Office. Health Department personnel asked the deputies to issue trespass warnings, and no other law enforcement action was taken.

The Sheriff’s Office said it does not have further information about the incident.

When asked whether there have been other cases of people misrepresenting themselves to try to get vaccinated, Pino said there had been a few, including one man who shared the same name as his elderly father.

“As we are engaged in this process of trying to move people quickly, some people could squeeze in, so it’s probably higher than we suspect,” he said of the exact number.

And, noting that vaccines are “the hottest commodity,” he said officials have increased security around the site to prevent similar incidents from happening in the future.

Other states have also issued warnings against such plots. New York Gov. Andrew Cuomo has proposed legislation that would make it a crime to provide vaccines to people who are trying to skip the line, and officials in an Indiana county said earlier this month that as many as 30 people had lied about their vaccine eligibility in just one weekend, which they called a “substantial lack of morality.”