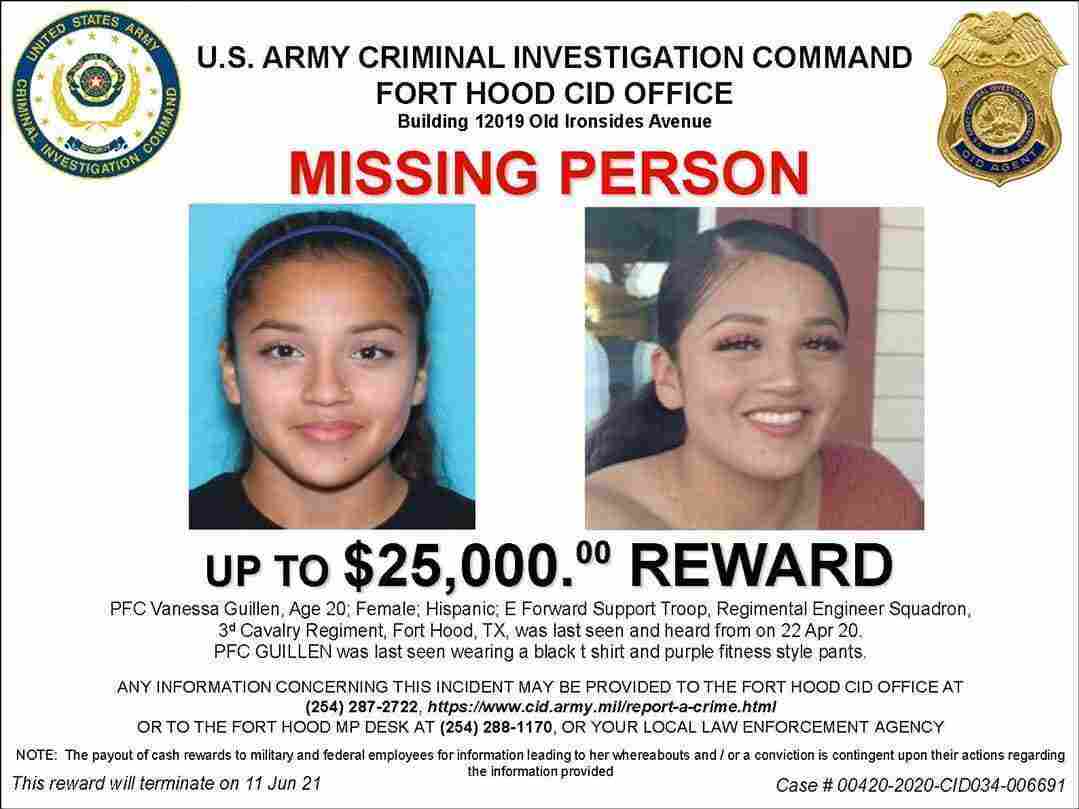 Spc. Vanessa Guillen, seen here in a poster released by U.S. Army investigators, was last seen alive at Fort Hood in April. Now a woman is in custody and accused of dismembering her body.

For months, Spc. Vanessa Guillen’s family held out hope that their daughter and sister, last seen at Fort Hood in Texas, was alive.

But this week, remains were found near the Leon River, north of Austin. The FBI is awaiting a positive DNA analysis, but the family believes the body is Guillen’s. On Thursday the FBI filed a criminal complaint alleging what her family had feared from the beginning: Guillen had been murdered on the base by a fellow soldier and buried near the river.

The murder suspect, 20-year-old Spc. Aaron David Robinson, killed himself Tuesday as law enforcement was closing in. The FBI has since charged Robinson’s girlfriend, 22-year-old Cecily Aguilar, with one count of conspiracy to tamper with evidence.

Guillen’s family believes her death was linked to sexual harassment she said she was enduring on base. Now they are pushing for congressional legislation to create an independent agency for soldiers who are victims of sexual harassment and assault.

In a statement, Fort Hood officials said the criminal investigation “has not found any connection between sexual harassment and Vanessa’s disappearance.” Investigators said they plan to further examine the sexual harassment allegations that have come out since Guillen disappeared.

Maj. Gen. Scott Efflandt said he has requested an investigation of Fort Hood’s Sexual Harassment/Assault Response and Prevention Program, which is designed to prevent sexual assault. Efflandt wants to “assess whether the command climate is supportive of Soldiers reporting incidents of sexual harassment and sexual assault,” and to “identify any potentially systemic issues with the SHARP program at Fort Hood, as well as any resource constraints.”

The criminal complaint lays out the gruesome details of Guillen’s murder: Robinson allegedly struck Guillen multiple times in the head with a hammer, killing her. He then allegedly put her inside a box, and then took the box to a remote location near the Leon River in Belton, Texas.

According to the complaint, Robinson picked up Aguilar from work and drove her to where the box was located. Aguilar told investigators she helped Robinson dismember the body using an ax and a machete, removing her limbs and head. After first attempting to burn the body, the two then allegedly buried her remains in three separate holes.

If convicted, Aguilar faces up to 20 years in federal prison.