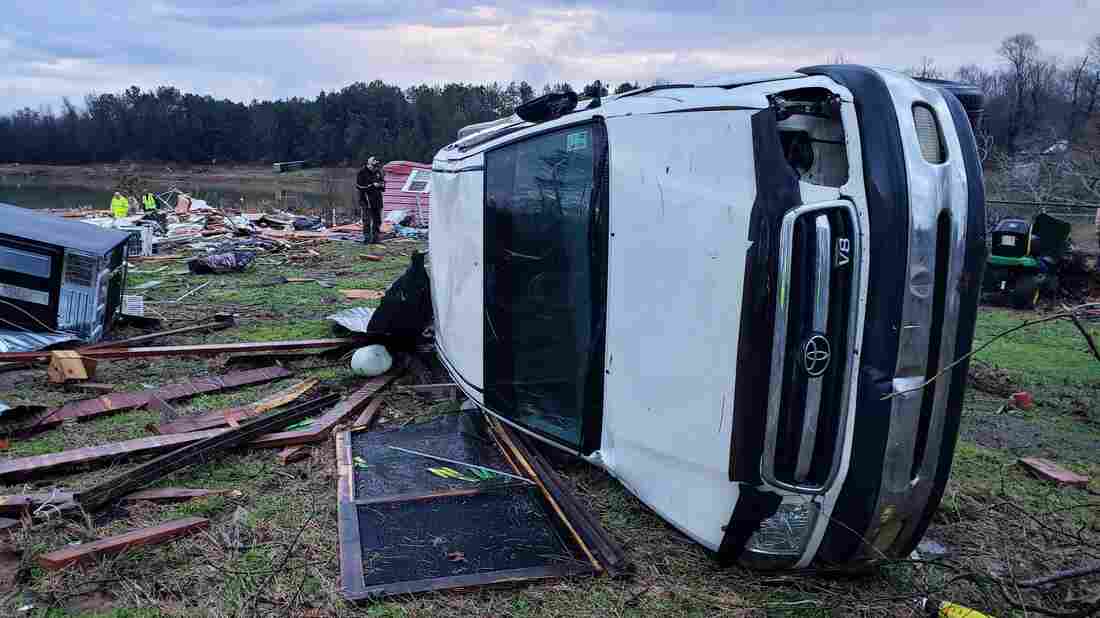 This photo provided by Bossier Parish Sheriff’s Office shows damage from Friday night’s severe weather, including the home of an elderly couple who died in Bossier Parish, La.

Authorities say at least nine people have died in severe storms that are spreading across much of the United States, bringing dangerous winds across the South and blinding snow and ice to parts of the Great Plains and Midwest.

At least seven tornadoes have been confirmed in Arkansas, Missouri, Oklahoma and Texas, according to the National Weather Service.

Three people were confirmed dead in Alabama near the town of Carrollton in Pickens County after “an embedded tornado within a long line of intense thunderstorms” ravaged the area, according to the Alabama Emergency Management Agency.

In Lubbock, Texas, two first responders were struck and killed by a vehicle as they were attending to a traffic accident brought on by icy road conditions. A 27-year-old police officer died at the scene, the Associated Press reported, while a 39-year-old firefighter was pronounced dead at the hospital. A second firefighter injured at the scene was in critical condition.

A third person was reported dead in Texas when a car flipped into a creek in Dallas as severe thunderstorms swept through the city.

On the other side of the Texas border in the town of Benton in Bossier Parish, La., winds were so strong that they peeled the roof off an entire wing of a middle school, local TV station KSLA reported.

Firefighters in Bossier Parish recovered the bodies of an elderly couple on Saturday near their demolished trailer, the sheriff’s office wrote in a post on Facebook.

Another man died when a tree fell on his house in Oil City early Saturday morning, according to the Caddo Parish, La., coroner’s office, as reported by the AP.

The violent thunderstorms got underway in Texas and Oklahoma on Friday, dumping rain and bringing high winds as the storm system moved east and northeast. In Texas and Mississippi, meteorologists recorded winds as high as 80 miles per hour — the speed of winds in a Category 1 hurricane.

The National Weather Service reported an “enhanced risk” of severe storms in parts of the region, declaring “the greatest threat for tornadoes” in parts of Alabama, Georgia and the western Carolinas. Severe thunderstorms also passed through Arkansas on Friday night.

By Saturday, the destruction was widespread, with downed trees and power lines scattered across the streets, and many homes damaged or destroyed.

Parts of the region remained in a blackout on Saturday as storms continued to churn. More than 105,000 people in Georgia were without power, according to the website Poweroutage.us. Nearly 83,000 in Alabama and 35,000 people in Mississippi were also without power.

As the severe weather continued to move northeast on Saturday into colder climates, the Chicago area braced for ice and snow, cancelling some 1,000 flights, the AP reported. The National Weather Service in Chicago also warned of nearly 20-foot-high waves on the city’s lake shore, and freezing rain brought power outages to more than 5,000 structures in northern Illinois.

Snow also fell in other parts of the region on Saturday. In Kansas, the streets were coated with a 1-inch dusting, while much of Iowa was in whiteout conditions as four inches of snow fell on Des Moines.

East of the Mississippi River, the weather was much sunnier, with temperatures that were 20 to 30 degrees higher than normal for this time of year. Many areas were expected to set record highs, including a high of 70 degrees in Washington, D.C. and 67 degrees in New York City.