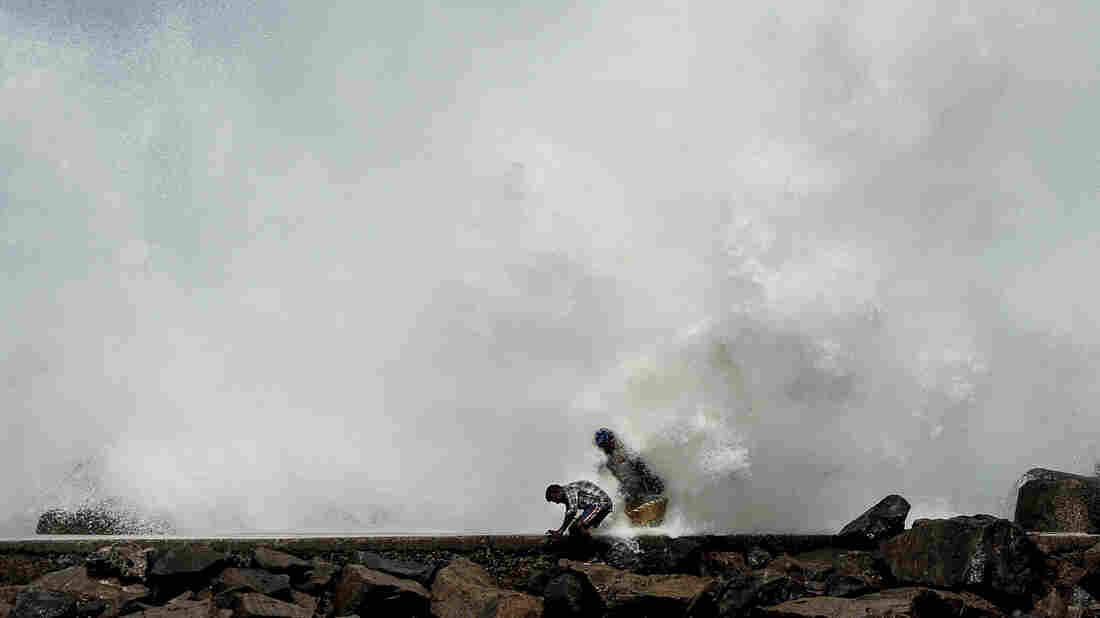 Two men duck for cover as waves generated by Cyclone Amphan smash against a breakwater Tuesday in Chennai, India. Farther north along India’s east coast, near the country’s border with Bangladesh, officials are struggling to evacuate areas in the storm’s path.

A storm of massive proportions has thumped the coastal border regions of India and Bangladesh, slinging heavy rains and gusts exceeding 100 mph when it made landfall. After days of churning in the Bay of Bengal, Cyclone Amphan came ashore Wednesday afternoon local time on the northeastern coast of India with the strength of a Category 2 hurricane.

The cyclone has diminished in strength since its peak Monday, when its monster scale briefly earned the India Meteorological Department’s highest storm classification — an ominous distinction not seen in the region for more than two decades. But even in its weakened state, Amphan packed a wallop that has knocked out power and wrecked unstable structures along the coast.

“These are the fisherman communities. They are the most vulnerable people — people living close to the sea,” said Kirti Mishra, who works with Catholic Relief Services in her hometown of Bhubaneswar in the Indian state of Odisha.

“They have thatched or asbestos sheeting as roofs,” she added. “We have observed that these get blown off or they collapse completely. The walls are made of mud. With the rains and everything, the wind blows the roof away and the walls collapse.”

The need to evacuate areas in the storm’s path has complicated the official response to still another catastrophe unfolding in both countries: the coronavirus pandemic. The same day the cyclone made landfall, India reported its highest single-day rise in confirmed cases, bringing its total tally north of 106,000. Bangladesh has reported more than 26,000. 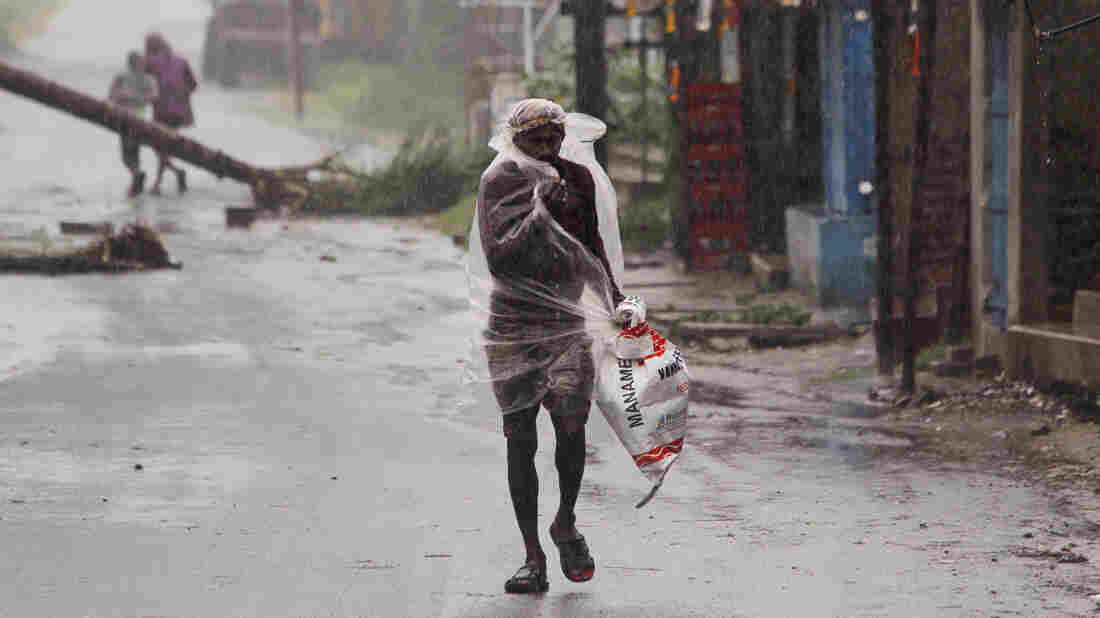 A man protects himself from the driving rain with a plastic sheet Wednesday in the eastern Indian state of Odisha. Officials in India and Bangladesh moved more than 2 million people into shelters as Cyclone Amphan bore down on the border regions.

Between both countries, officials managed to evacuate the coastal regions of some 3 million people. But their efforts have met some significant roadblocks.

“There was some resistance for the evacuation effort because of the fear of COVID-19,” Mishra explained. “But late last evening people realized they need to be safe, and therefore they started moving voluntarily into the cyclone shelters.”

In Bangladesh, government officials were able to move less than half the 5 million people they had intended to place in shelters before the storm’s arrival, according to Kaiser Rejve, who works as humanitarian and resilience director for the international aid group CARE. He said they are hoping to place the rest in more secure shelters by the end of Wednesday.

“A lot of stress is already ongoing. You know, the last two months, during the lockdown situation, poor people have already been hard hit. Their income is reduced,” Rejve said from the capital, Dhaka. Because their homes often hold what little they have left, Rejve explained, “they fear it will be lost if they move away from their homes.”

What’s more, it’s also Ramadan, during which Muslims observing the holiday do not eat or drink during daylight hours. Bangladesh is a majority-Muslim country, and many people are fasting. Meanwhile, there are also fears that a storm surge as large as the one caused by Amphan — which could rise as high as 16 feet in some areas — could bust through levees and poison their water supply. 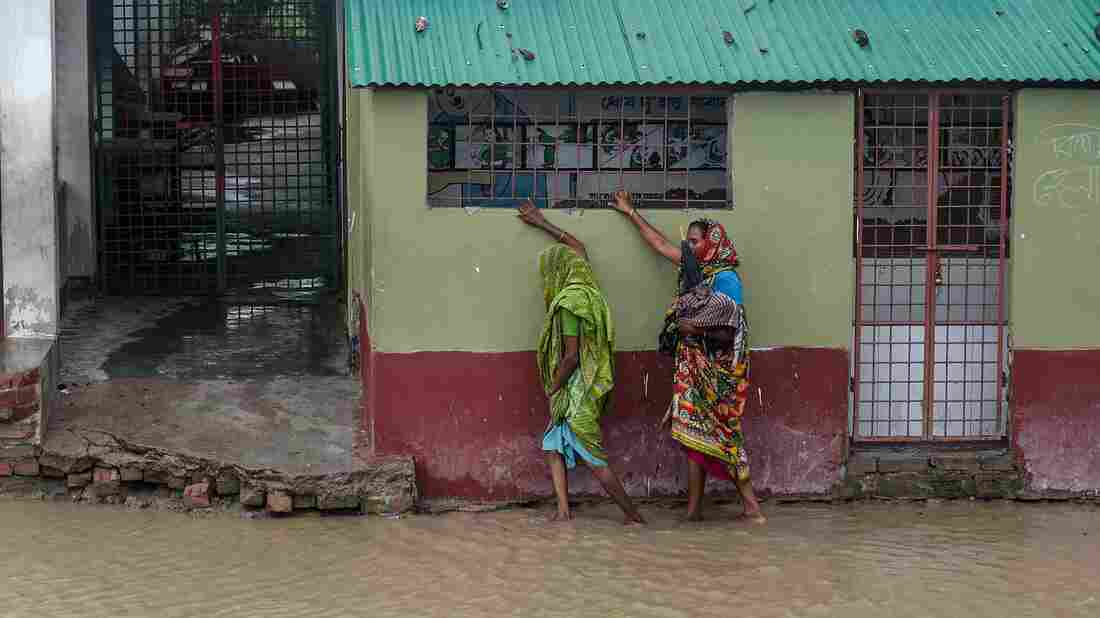 Residents gingerly tread a flooded street on their way to a shelter Wednesday in the border city of Khulna, Bangladesh.

Amphan also poses acute dangers for migrants living in Bangladesh’s large resettlement camps — including those in the city of Cox’s Bazar, the temporary home to hundreds of thousands of Rohingya refugees from neighboring Myanmar. In such camps, options for sturdy shelter are often limited.

“At this moment, we’re at red danger level 10 — the highest warning level for cyclones. Our volunteers are communicating that to refugees,” Rejve said. “In the camp area, there are some strong houses, but the main message there is to stay in your house because there is no strong cyclone shelter there.”

Even where there are shelters to scramble to, the idea of social distancing can make for a dicey proposition. Officials in India intend to fill the shelters — many of which were previously COVID-19 quarantine centers — only to half their usual capacity, and the people holing up inside are expected to cover their faces as best they can.

The storm is expected to continue its course north and trundle the brunt of its winds and rain into Bangladesh overnight local time.