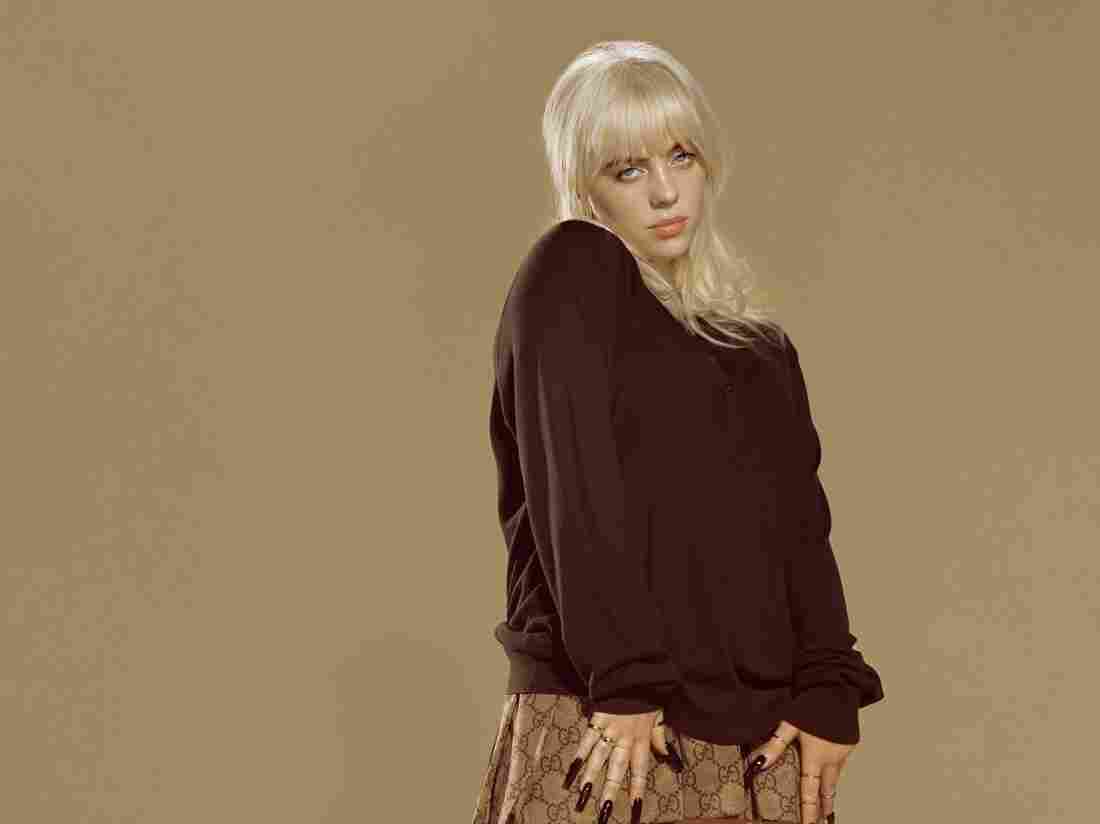 Billie Eilish’s second album, Happier than Ever, is out now.

Billie Eilish has a message for the world: “I’m not your friend / Or anything, damn / You think that you’re the man / I think, therefore, I am.” Still just 19, the pop supernova has spent the past few years living a very public life. She’s won seven Grammys over two consecutive years, run circles around her peers on the Billboard Hot 100 and become a figure of discussion and scrutiny, some of it perhaps a little too familiar.

Her second full-length album, Happier than Ever, is out now. Like its predecessor, When We All Fall Asleep, Where Do We Go?, it’s a collaboration with her brother and producer, Finneas O’Connell. But after a career debut like few others, Eilish’s style is evolving: new sounds (including a detour into bossa nova-inspired grooves), a new visual toolkit and lyrics shaped by experiences as a very young woman on a worldwide stage.

Eilish spoke with NPR’s Lulu Garcia-Navarro about where Happier than Ever finds her and her outlook on life, fame and performance. Hear the radio version at the audio link, and read on for an edited transcript.

This interview has been edited for length and clarity.

Lulu Garcia-Navarro: You had huge success with your first album, and there’s always a lot of pressure for a second album after something like that. Did you feel that way?

What’s funny is, for the making of the album, I felt no pressure. I wasn’t worried; I was super confident. I really felt that I did the best that I possibly could have done with a second album: I didn’t stay exactly doing the same thing, but I also didn’t change into something else, I grew. I thought that that was really good. It was when I started releasing music from the album, putting out singles, that suddenly I was like, “Wait.”

[Laughs] “People are going to listen to this?”

Yeah! “People are going to listen and tell me how they feel now? No!” But, it’s OK. It’s really just about me liking it, and the real fans liking it. That’s all I care about.

This album is called Happier than Ever. So, how are you: Are you happier than ever? Why did you call it that?

I mainly wanted a title for my album to be, like, un-mispronounceable. I feel that was a strong, easy to pronounce, easy to say, can’t-get-it-wrong title. [But the song it’s named after] is one of my favorite songs on the album. It’s one of my most important songs I’ve ever written.

Tell me why. What is it about this song?

Do you ever want to say something to somebody for a really long time? You don’t really know what you want to say or how to say it — and then maybe you have a conversation with somebody else, or you think a little bit about it, and you figure out what it is you’ve been trying to say for this entire period of time? That’s how it felt: That was the entire writing process, that was the recording process. Everything involved in this song felt like how it feels when you finally find the words for something.

Is it about a particular person, or just more about that feeling when you actually understand something about a relationship that you’ve had?

I mean, obviously it’s about somebody, but it’s also really about a feeling, and kind of a realization. I just mainly hope that people listen to this and go, “Oh, yeah — that’s what I’m trying to say.”

You are now 19, and you’ve been in the public eye for a while. Tell me about the song “OverHeated.”

You can kind of understand it by just listening, I would say. I think it was just a moment of being really pissed off as a young woman in the public eye: You know, it’s infuriating. It’s hard enough to be a young woman not in the public eye, and just have lots of public eyes looking at you … let alone being famous and having a million people look at you constantly. I think it’s just thoughts coming from a place of fury and unfairness and just feeling angry at the world and society, I guess.

What have you learned about coping with that glare, though? I mean, what do you do to remain you?

I honestly don’t know. I think that there’s not much you can do. … It’s like, if you’re at the dentist getting your wisdom teeth done, and they give you anesthesia and then you say to yourself, ‘I’m not going to fall asleep, I’m not going to fall asleep,’ you can’t not fall asleep. … I think that you just have to keep going and not not be scared of living, I guess. And I wish I would take my own advice in that realm of just like, it doesn’t matter. You can change, and you can change your mind, which I think the internet forgets.

And I mean, you are changing: You’ve changed your look recently, you are experimenting with different types of music on this album. I want to ask about your aesthetic, how you see clothes and appearance playing into your art — and if you see that as part of the music, and how you interact with people who love your music.

With aesthetics and eras of a musician or an artist, it’s all just for the eye. It’s not really real. I guess that you can change your look to try to change yourself, for sure. But in terms of album promo, and the photo shoots being a certain style — that doesn’t change you. It’s just a choice for something that you wanted to accomplish visually, you know? I did the same thing for my first album: I chose to have a look and an aesthetic and a style for that album specifically, and all of the shoots and stuff involved in the videos, I wanted that to be kind of creepy, more like horror and dark and in the theme of monsters under your bed.

For this one, I wanted the theme of old Hollywood and beautiful and classy. It’s just funny that people see new photo shoots and immediately think that you’re a different person. I see people call me Blonde Billie — like, “Blonde Billie said this, but Green Billie didn’t say this.” And I’m like, what the hell? I’m not a category of a person. I’m the same person, for my whole life. I like this thing this time, and I like this thing that time.

To that point, the song “Not My Responsibility” is saying something similar with its title — which is, whatever you see is about you, not me. Am I right in understanding it that way?

Yeah, for sure. And that goes for so many different things. It goes for all women who wear what they want and a man says, “Oh, don’t expect me to not harass you if you’re wearing that.” It’s like, no — that’s your responsibility to not harass me. It’s nobody’s responsibility to cover themself or restrict or restrain themself for somebody else’s, like, weak willpower. It’s not our job.

There’s a lot about womanhood in this album and exactly what you’re talking about, the ways in which it can be twisted, the ways it can be taken advantage of. When the song “Your Power” was released, I sent it to a bunch of my female friends and relatives, because I think it speaks to something that a lot of girls and women have dealt with. When did you start to realize that every girl, every woman, has a story where they were sort of taken advantage of?

I don’t even know when I realized it. The song is kind of from the perspective, like … this wasn’t an actual situation of my life, but I thought it would be interesting to write it as if it was me talking to somebody that I was friends with or in my family, or somebody that I knew, and they were abusing their power. And I was having a like, heart-to-heart with them, trying to tell them not to.

We should say, there are also happy songs here — about love, the good part of connecting, the sort of empowering part of being with someone. I want to actually go to Billie Bossa Nova because I used to live in Brazil, so I was real happy to hear this. Have you been to Brazil?

It’s like the main place that I should go. The first fan account I ever had was Billie Eilish Brazil. For real.

I have a very special place in my heart for Brazil. I wanted to pay respect to bossa nova and Brazil and just the entire culture around it cause I love it so much. I don’t know, I just love a little feel-good, you know, move around feeling, sexy little song.

And you’ve just made a lot of people in Brazil happy, I can tell you right now … The last thing I want to talk about is “My Future.” In this song, there’s a line that says, “I’m in love with my future / Can’t wait to meet her.” I haven’t been able to stop thinking about it; it’s a really interesting line. Why did you write it?

Good question. I want joy and content with myself. I want to feel better about myself, and more, I guess, proud of who I am. I don’t know what my future holds, but I really want to do shows — that’s the main thing that I hope and see for myself.

What does that do for you, when you’re out performing?

There is no feeling like the feeling on stage in front of people that just truly adore you and that you adore, just looking at you and you looking back at them. … I don’t ever feel like I’m above anyone when I’m on stage: I feel like one with them, and I feel like I want to impress them and just have fun with them. I never want to spend this much time away from doing shows ever again, thank you very much.