Barr: ‘Door Is Open’ To Giuliani Tips On Ukraine, Though They’d Be Scrutinized 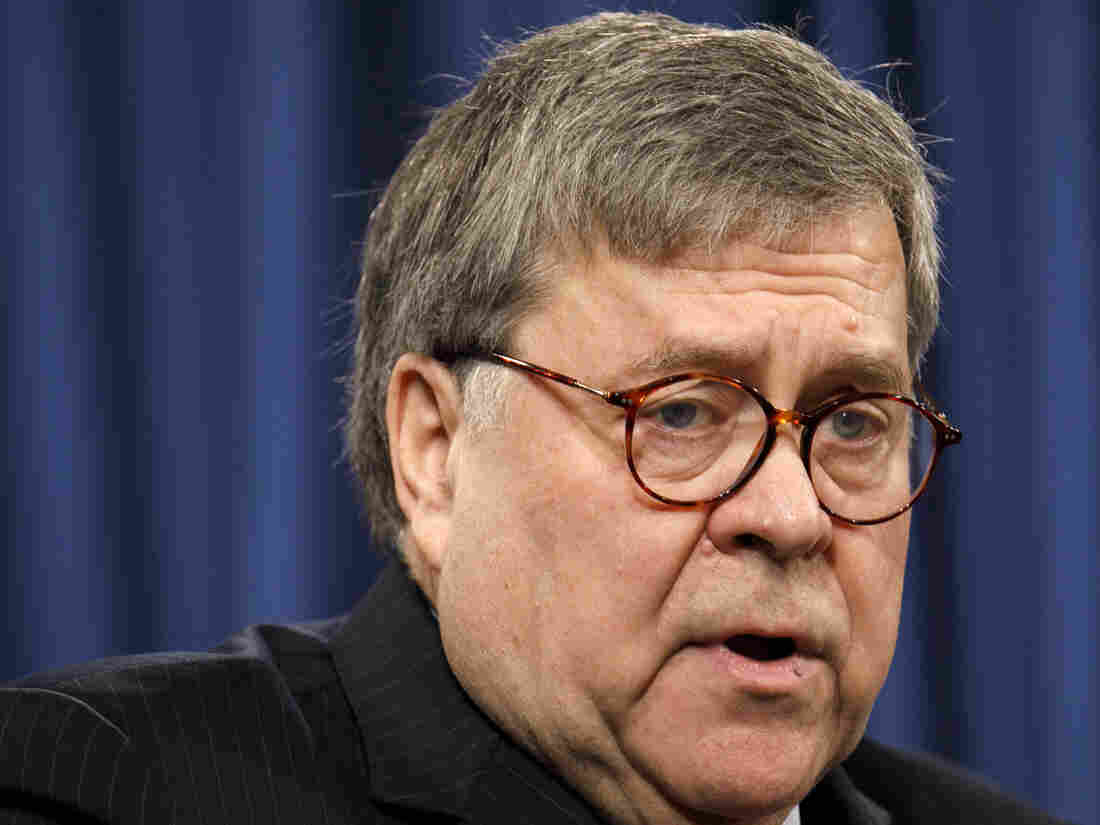 Attorney General William Barr at a news conference on Monday at the Justice Department.

Barr was asked during an unrelated press conference about the prospect that Giuliani, who has been at the center of the Ukraine affair, might give information or materials to authorities.

“The DoJ has the obligation to have an open door to anybody who wishes to provide us information that they think is relevant,” Barr said.

The attorney general stopped short, however, of committing to take any action. The question and answer followed an earlier suggestion by Sen. Lindsey Graham, R-S.C., that Giuliani might know something serious enough to warrant action by the FBI or prosecutors.

“As I did say to Senator Graham, we have to be very careful with respect to any information from the Ukraine,” Barr said. “There are a lot of agendas in the Ukraine, a lot of cross currents, and we can’t take anything we receive from Ukraine at face value.”

The exchange underscored that although Trump has been impeached and acquitted, the underlying currents of the Ukraine affair likely will continue.

Trump wanted Ukraine’s government to launch investigations he thought might help him in the 2020 election, including one into alleged impropriety by the Bidens. Trump froze military assistance for Ukraine for a period of weeks last year, then restored it; Ukraine’s leaders did not open the investigation he wanted.

Democrats in the House impeached Trump for what they called an abuse of power and subsequent obstruction of Congress; the Republican-controlled Senate acquitted the president and permitted him to remain in office.

All along, Giuliani has continued to pursue what he calls investigations of the Bidens; he told NPR there’s “overwhelming evidence” the former vice president “committed a very serious crime” there.

Neither Joe nor Hunter Biden has been charged with any crime and they’ve denied all wrongdoing.

The continued efforts by Trump and his agents, Biden’s campaign argues, are evidence of how much Trump and Republicans fear Biden’s chances to unseat Trump in the 2020 presidential campaign.

But the saga also has drawn attention to the money Hunter Biden received from overseas contacts at a time when his father was the vice president and, more broadly, to Hunter Biden’s personal and drug abuse issues.

Barr did not take additional questions about Giuliani or Ukraine on Monday so it isn’t clear whether Giuliani has any actual briefing scheduled with Justice Department officials to transmit what he calls the evidence of wrongdoing.

The attorney general did say the Justice Department has established an “intake process” for bringing in information about Ukraine so that it could be “carefully scrutinized by the department and its intelligence community partners so that we could assess its provenance and its credibility.”