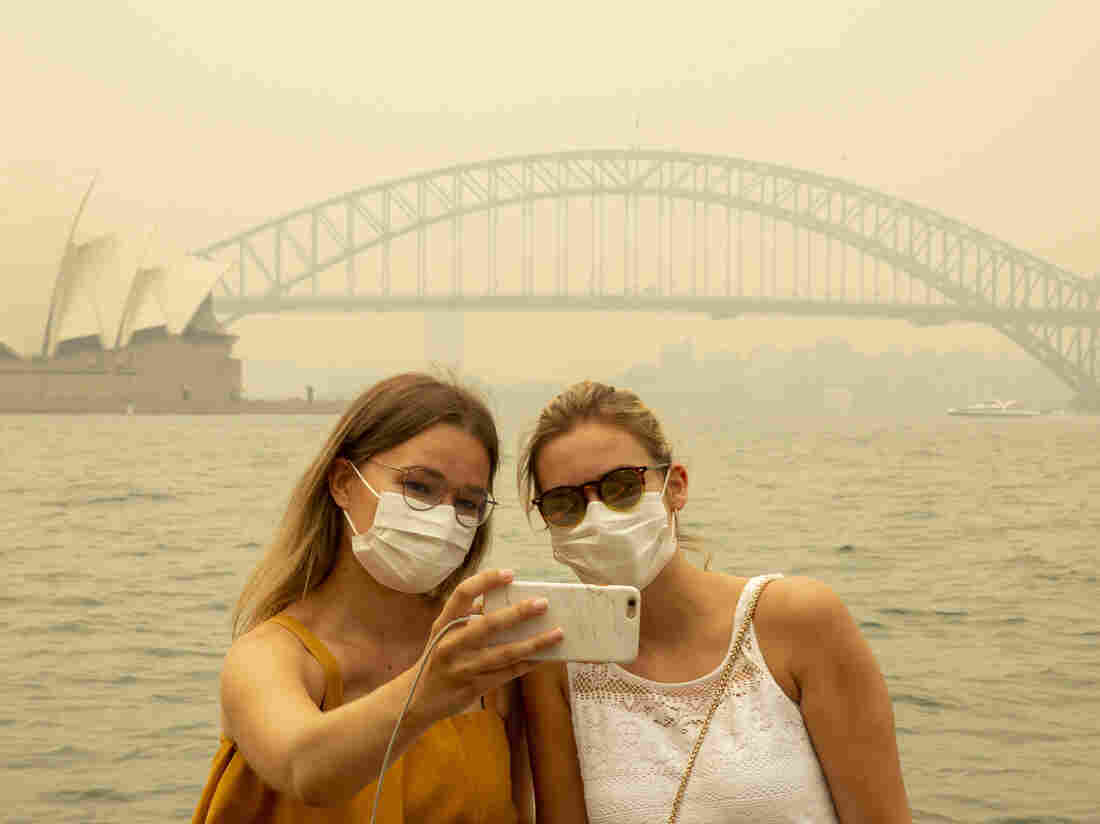 Tourists, wearing face masks due to heavy smoke, take a selfie at Sydney Harbour on Dec. 19, 2019. As news of Australia’s wildfires spreads around the world, fewer tourists are arriving in the country.

Australia calls itself the Lucky Country, a nation so fortunate in geography and natural resources that it hasn’t had a recession in nearly three decades.

But the deadly wildfires raging through large parts of the country are slowing tourism and other key sectors that contribute to its impressive economic growth.

“Just the area of Australia that’s now impacted is unheard of. So we are in uncertain territory,” says Martin North, principal at the research firm Digital Finance Analytics.

The wildfires have killed more than two dozen people more than a billion animals. They’ve destroyed more than 1,800 houses, an untold number of commercial buildings and thousands of acres of prime farmland, according to the Insurance Council of Australia.

Insurance losses so far have totaled nearly a half billion dollars, but the numbers are likely to rise sharply, says Campbell Fuller, the council’s head of communications.

“For [the fires] to burn across such a wide area, over such an extensive period, is uncommon. In fact, it’s unprecedented to have that number of bushfires burning concurrently,” he says.

The fires have damaged two pillars of the Australian economy: the agricultural sector, which was already weakened by a severe drought, and the all-important tourism industry.

Winter in the Northern Hemisphere is peak tourist season in Australia, when visitors from Asia and Europe flock to the country, eager to soak up the sun and enjoy the country’s outdoor lifestyle.

As news of the wildfires spreads around the world, fewer tourists are arriving and those who do come have had to endure less-than-ideal conditions.

Even in Sydney, far from the fires, skies are so smoky that fire alarms have gone off in office buildings. Ferry service in the city’s world-famous harbor has sometimes been canceled because of poor visibility.

The campground run by Fiona Austin in Shoalhaven, south of Sydney, is usually full this time of year, but tourists were ordered to evacuate, and only a few people remain.

“It’s affected a lot of businesses, and I can’t see people coming back at the moment when the fires are still burning,” Austin told NPR’s Jason Beaubien.

The fires mark something of a change of fortune for the Australian economy, sometimes called the Wonder Down Under.

The country has benefited enormously from its proximity to Asia, says Justin Wolfers, an Australian native who is a professor of economics and public policy at the University of Michigan.

“Not only did we start the last few decades a relatively rich country in the club of the first-world industrialized countries, we’re also parked right next to Asia, which is where much of the world’s growth has come from over the past few years,” Wolfers says.

China, in particular, has been hungry for the kinds of commodities Australia has a lot of, such as coal, natural gas, wheat and wool, and it sends more tourists to Australia than any other country.

Wolfers says the Australian government has also demonstrated more skill than other countries at navigating the challenges of the global economy, like the Asian financial crisis of the late 1990s.

While the U.S. Congress was squabbling over how to address the Great Recession, the Canberra government was acting swiftly to stimulate spending and cut interest rates, he says.

Unlike other industrialized countries, Australia has experienced a steady rise in population, largely because of immigration, so even in slow times the economy has kept growing, Wolfers adds.

“The growth levels in Australia are lower than they’ve been in a very long time,” North says. “We were already looking … pretty shaky and that was before all of the bushfires.”

One potential problem is that many Australians haven’t updated their insurance policies over the years or have let them lapse altogether, he notes.

Australia has suffered through catastrophic fires before, such as the 2009 conflagration in Victoria, which did billions of dollars in damage. But the current fires are affecting a much bigger area, and they’ve also begun earlier, making it hard to assess how much they’ll cost.

“What’s really concerning to us is that this is still relatively early in our typical bushfire season” and there are worries about how much longer it will last, says economist Katrina Ell of Moody’s Analytics.

Ell doesn’t think a recession is likely, but North isn’t as sure.

The fires started in relatively unpopulated areas, but they’re moving closer to the cities, where they can do a lot more damage, he says.