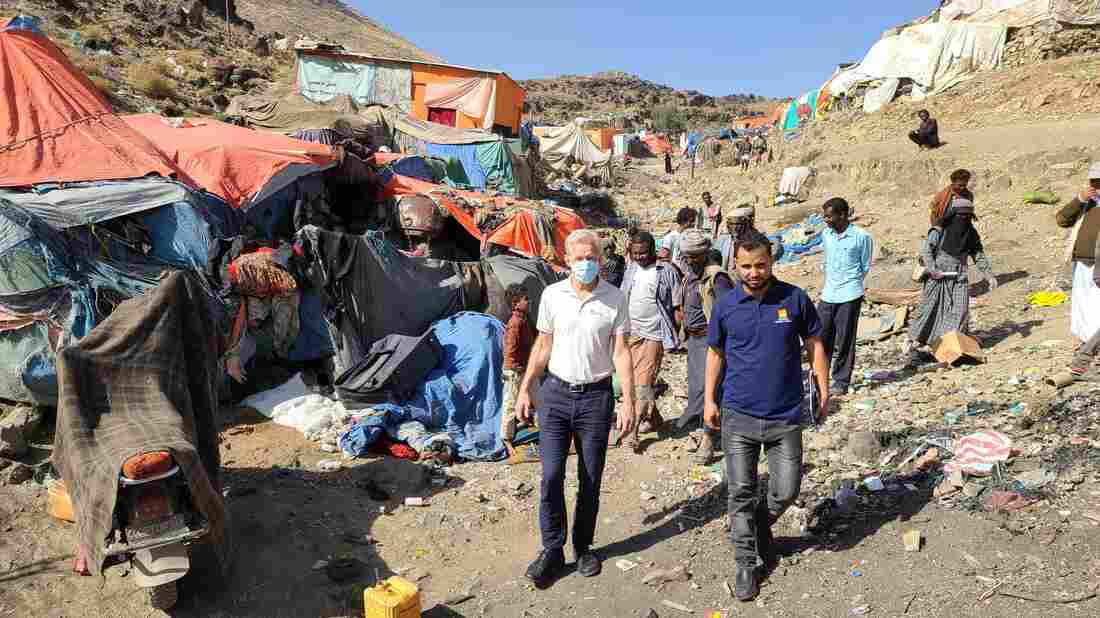 Hunger has been weaponized in the war in Yemen, says a former U.N. official who is currently in the country.

“We are seeing a relentless countdown to a possible famine that the world hasn’t seen since Ethiopia in the 1980s,” says Jan Egeland, who is now secretary-general of the Norwegian Refugee Council.

The need is enormous: Nearly 50,000 Yemenis are already starving to death and 16 million will go hungry this year, according to the United Nations.

The U.N. held a conference Monday to attempt to drum up $3.85 billion in new humanitarian aid. Rich countries cut back on donations last year as the pandemic took hold.

By Monday afternoon, pledges appeared to again fall drastically short of the request. Egeland said he was “deeply disappointed,” while the head of another leading humanitarian aid group, the International Rescue Committee, called the $2 billion shortfall a “failure of humanity.”

Egeland, who is spending a week in Yemen, told All Things Considered on Monday that he has traveled from the capital of Sanaa to the northwestern provinces of Amran and Hajjah, where he has seen “children now having starved for so long that they were dying from all of the associated diseases.”

He visited a community of families who fled the fighting in the country’s south and now live near a garbage dump north of the capital. They are forced to live off the scraps of food people throw away, he says.

This Muhamasheen community in Amran, Yemen, lived on the margins of society before the war.

Now displaced, they survive on the little scraps they find in a nearby rubbish dump.

Crisis means there is less food left in the waste. If Yemen gets funding we can help them. pic.twitter.com/05YM7nmnTd

“This is subhuman conditions that I haven’t seen anywhere to that extent,” Egeland tells NPR.

At a clinic that helps starved children, Egeland says he met a mother and her 9-year-old daughter. The 9-year-old looked only 3 or 4 and was so malnourished she couldn’t walk. The mother had 14 children but five have died from diseases related to malnutrition. Her husband’s work as a day laborer dried up when COVID-19 hit.

“I want you to tell our story,” Egeland says the woman told him.

In addition to more funding for aid, Egeland says there needs to be a “famine prevention” cease-fire. The war in Yemen started in 2014, when the Iran-backed Houthi militant group overtook Yemen’s internationally recognized government in the capital. A Saudi-led coalition soon began airstrikes in support of the ousted Yemeni government.

But what the Saudis first envisioned as a weeks-long campaign has dragged on nearly six years. More than 233,000 people have already died. The Saudi-led coalition imposed a blockade, restricting the flow of food, fuel and medicine.

The conflict has caused a chain of reactions, including internal displacement, economic collapse, the destruction of health systems and multiple disease outbreaks.

A U.N. refugee agency official recently wrote that COVID-19 isn’t even the biggest concern as far as diseases go.

The war has made it difficult for aid groups to operate. About two-thirds of Yemenis likely rely on food assistance to survive, according to the U.N.

“We need access to all of these conflict and disaster zones where we do not get permits to operate as we should,” Egeland says. “Just going from two towns here now in the capital, Sanaa, to Hajjah, we had to cross nine checkpoints. And at any of those, you know, you can be held back for any amount of time.”

The U.S. has supported the Saudis during both the Obama and Trump administrations, with intelligence-sharing, logistical support and targeting information. The U.S. has sold billions of dollars-worth of weapons to Saudi Arabia. U.S. bombs have killed people in hospitals, schools and homes.

Now the Biden administration says it’s ending support for “offensive operations” and assigned a special envoy to pursue a diplomatic end to the war.

Egeland says the renewed peace effort is a “good thing.” He hopes there is an “impulse also of other countries that are still fueling this war, Gulf countries and Iran among them, to end it, and then that these grown men with arms and power sit down before they kill all the children.”

He says he also hopes “to see the U.S. really energetically lead this peace effort because we really need leadership in averting a famine caused by a man-made war.”