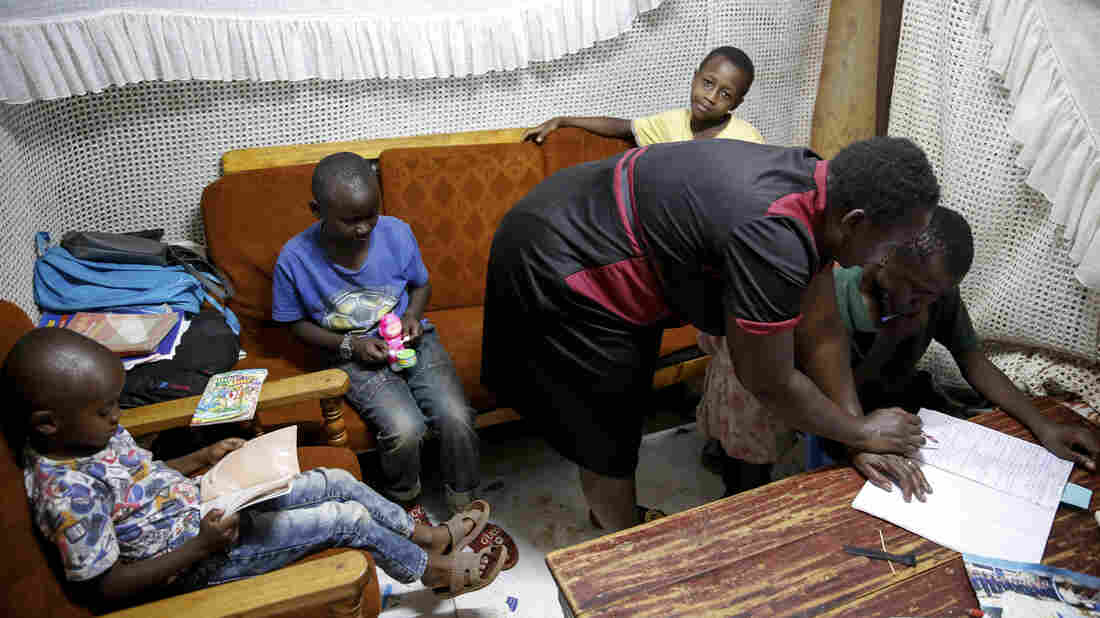 In Nairobi’s Kibera slum in April, Nancy Andeka, 45, teaches her and her neighbor’s children at home as schools are closed due to the coronavirus.

As Zuleika Yusuf Daffala walks across Kibera, one of the big informal settlements in Kenya’s capital, she greets dozens of kids on the streets. Some are jumping rope, others chasing each other through the alley and another group is trying to make a tiny cooking pan out of an aluminum can.

Daffala, a 37-year-old community activist, broke the news this week to many of the neighborhood kids that the Kenyan government had decided that the country’s more than 12 million grade school students would not be going back to classrooms until January 2021. Not only that, but the government considers the 2020 school year “lost,” so all kids will remain in the same grade for another year.

“They are still not believing it,” she says. “When you go to school, you have a target. So they have their plans already. They are not taking it easy.”

She says her son, a junior in high school, is resigned. Like most Kenyans, he doesn’t have a tablet or a laptop, so he’s trying to keep up with whatever books he can get his hands on. But mostly these days, he’s making bracelets with some beads his mother bought him.

Daffala says her kids are mostly OK. But in Kibera, many parents live on the dollar or two they make from whatever work they can find every day. So they cannot stay home with their kids.

More and more, she says, she’s getting calls from parents in the neighborhood that their teenage daughters are pregnant.

Kenya has long had one of the highest underage pregnancy rates in the world. But since early March, counties have reported thousands of cases. Citing an increase in teenage pregnancies, President Uhuru Kenyatta ordered his National Crime Research Center to investigate.

“Life has changed completely,” Daffala says. And chances are that many kids will never go back to school. 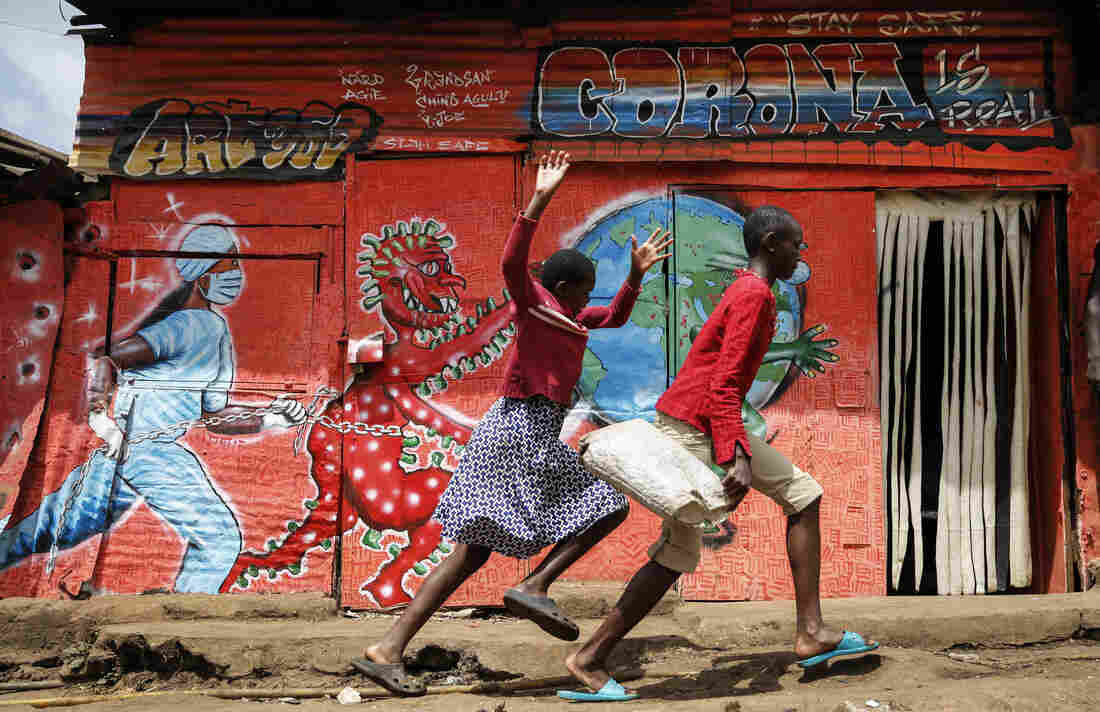 Children run down a street past an informational mural warning people about the dangers of the coronavirus in the Kibera settlement in Nairobi, Kenya, June 3.

Kenyan children have been out of school since March. But even as the coronavirus surges in the country, the government opened up hotels and restaurants and, beginning in August, Kenya will open up its international airspace. So there was hope that children could go back to school in September.

But on Tuesday, the government said schools are in no position to reopen, because many of them have more than 100 children per class.

At the announcement, government officials were flanked by teachers, who agreed with the plan.

“With children crowding, it will be impossible to think of opening schools,” Akello Misori, a leader for a big teachers’ union, said.

But Damaris Parsitau, an education scholar at Kenya’s Egerton University, says she is “conflicted” about the government decision. On the one hand, keeping kids out of school for that long will undoubtedly result in learning loss and will further marginalize vulnerable children. On the other hand, schools in Kenya are in a “horrible state,” she says, and there is no way to guarantee students’ safety.

“I would rather have children alive at home,” she says, “than go to school and risk getting infected and dying and taking it back to their families.”

All of this makes her angry, she says, because it points to a government that has failed to build more schools, hire more teachers and prioritize education.

“All this to me goes back to corruption and the fact that the government has never really taken it seriously to invest in educational infrastructure,” she says.

Back in Kibera, Jackline Bosibori, 17, has been spending almost all her days in a tiny room. It has a dirt floor and the walls and roof are made of corrugated metal.

Bosibori was going to a boarding school but like all Kenyan students, she was sent home in March.

“I was just idling here,” she says. “I didn’t have anything to do. Sometimes, I was just here reading alone. I don’t have anyone to be with … so I decided to just be at my boyfriend’s place.”

In late March, she found out she was pregnant. Her boyfriend is 21 and has stopped communicating with her. In Kenya, anyone under 18 cannot legally consent, so Bosibori was raped.

Her mom Annah Nyamoko, 35, can’t contain her tears when she talks about her daughter.

Nyamoko has six other daughters. She says her husband left her because they never had a son. She works sifting through trash to find recyclables, earning about $15 a week. But somehow she had always cobbled together enough money to pay her 17-year-old’s school fees.

The dream was that Bosibori would go to college, become a lawyer because she loves a good argument, and then help the family out of poverty.

Bosibori says she wants to give birth and go back to school.

“If you don’t have [a high school diploma] here in Kenya, there is no work for you,” Bosibori says.

But a 2015 survey of out-of-school teenage girls in Kenya found that as few as 10% ever return to school.

Bosibori doesn’t even want to think about that possibility, but huge questions hang over her: Who will watch her baby if she goes to school? Can her mom feed her siblings if she can’t work because she has to care for the baby? How does she pay for school fees? Will she be shunned? As it is now, she says people on the streets already stigmatize her, telling her she’s a disappointment.

“If I can’t go back to school,” she says, “I know my life would be miserable.”