Amid Democratic Street Uprising, Belarusian Strongman Gets Support From Russia 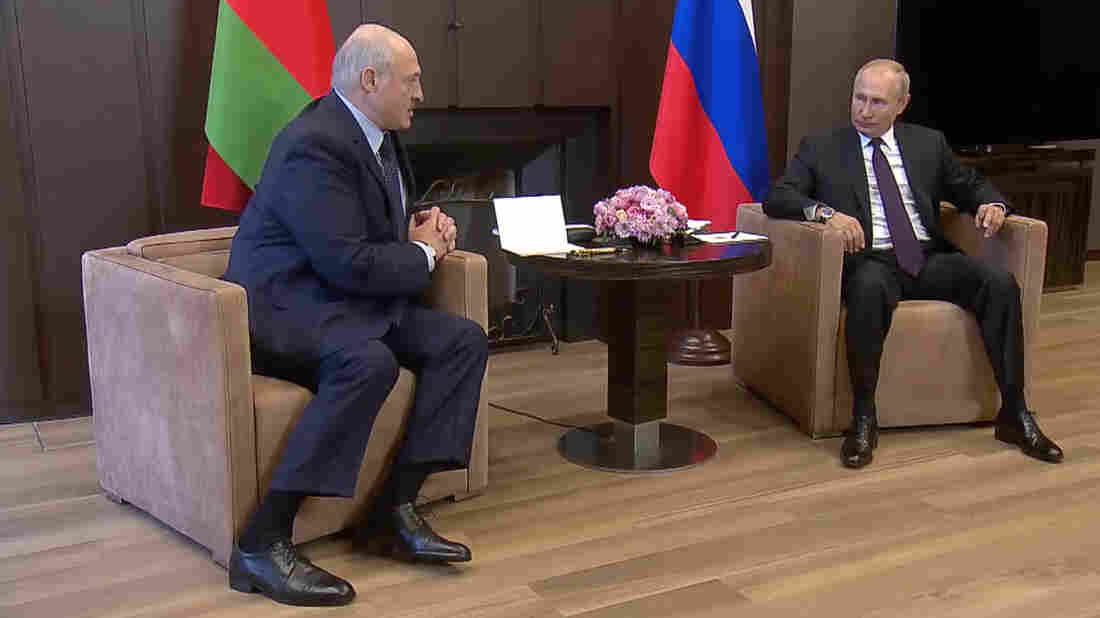 Russian President Vladimir Putin provided a limited lifeline to Alexander Lukashenko as the Belarusian strongman paid a visit to the Russian city of Sochi on Monday amid the biggest crisis of his 26-year rule.

For the past four weeks, Belarusians have repeatedly taken to the streets demanding Lukashenko’s resignation following an August presidential election that demonstrators say was rigged to keep Lukashenko in power.

On Sunday, a crowd of more than 100,000 again swamped downtown Minsk, the capital, for the fourth weekend in a row.

A repeated show of force by Lukashenko’s security forces has led to thousands of arrests — and credible allegations of widespread torture — but has failed to stem voters’ ire.

Lukashenko’s nickname in protest circles is simply “the rat.” A standard chant at rallies has become a basic demand: “Leave.”

Lukashenko has refused to step down, arguing he won his reelection in a popular landslide.

In extended opening remarks before cameras, the leaders’ body language seemed to characterize the power dynamic at play: Lukashenko leaning in hard toward Putin and the Belarusian strongman repeatedly wiping his brow as the Kremlin leader suggested he viewed the political crisis in Belarus as an internal affair for now.

“We want Belarusians themselves, without prompting and pressure from outside, to sort out this situation in a calm manner,” said Putin, leaning back in his chair.

Lukashenko was, by turn, almost painfully ingratiating in response — thanking his “older brother” and “all Russian people” for their support as Putin tapped the floor with his foot absent-mindedly.

“Everyone understands that Moscow has now become the kingmaker in the context of this political crisis,” said Yauheni Preiherman of the Minsk Dialogue Council on International Relations in an interview with NPR.

Yet Preiherman suggested that Russia’s position is far from settled.

“We’ll only understand Moscow’s longer-term strategy in Belarus in some time.”

Indeed, while nominally Moscow’s ally, Lukashenko has repeatedly tested the Kremlin’s patience on a range of issues, including the coronavirus, gas politics and a long-stalled plan to create a union state between the two countries.

Even ahead of the August presidential election, Lukashenko said Russia was behind a plot to disrupt the vote.

Protests in the wake of the vote have prompted a change of heart. Lukashenko now argues that the demonstrations are a Western-backed plot to end his rule and expand NATO to Russia’s borders.

NATO has repeatedly denied the charges.

Yet Lukashenko walked away far from empty-handed in his four-hour-plus meeting with Putin in Sochi on Monday.

Observers in Moscow suggested Putin was simply placing — by default — Russia’s geopolitical interests above all else.

“The legitimacy of any leader … is valued not by performance or genuine popularity of the leader, but by how well they maintain the distance” between Russia and the West, wrote Alexander Baunov of the Carnegie Moscow Center.

Yet any overly tight embrace of Lukashenko also risks alienating Belarusians who until now haven’t been trying to get out of Russia’s orbit.

Svetlana Tikhanovskaya, Lukashenko’s opponent during the disputed August election, issued a statement ahead of Monday’s talks saying she regretted that Putin had chosen “dialogue with a dictator” over the Belarusian people.

She also insisted any deals cut by Lukashenko in Sochi would be subject to future government review.

“As to those people who don’t agree with the results of the elections, they are all citizens of brotherly Belarus. We love and value them all.”