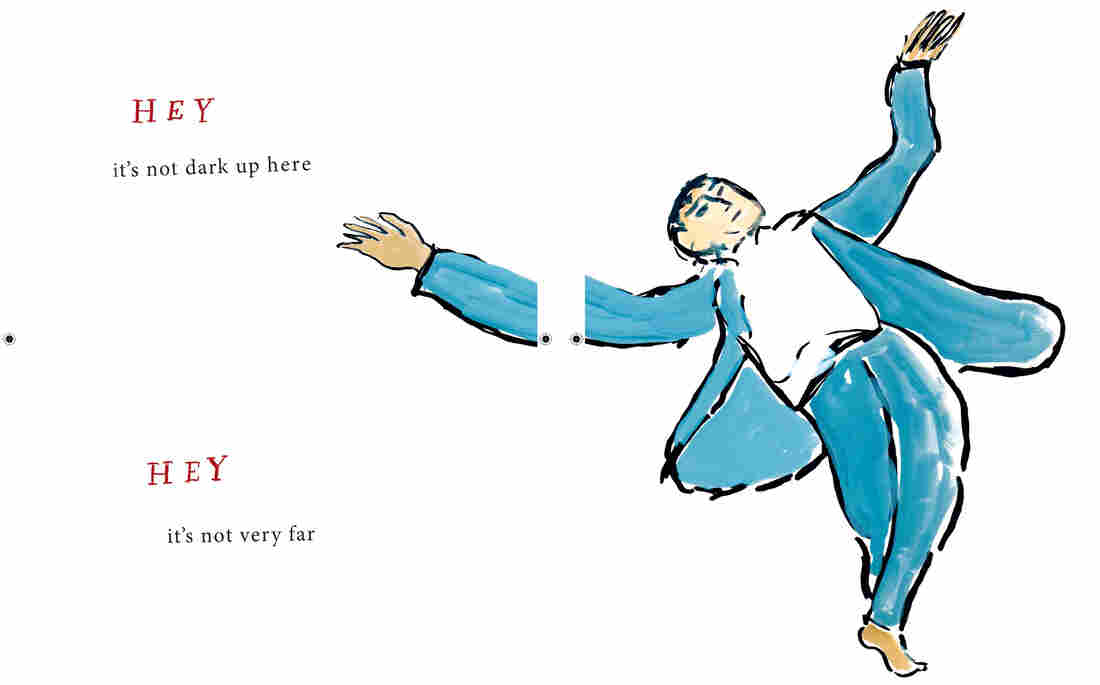 A page from American Utopia.

The New Wave musician and former Talking Heads frontman David Byrne cannot have known a pandemic was en route when he decided to convert his 2019 Broadway show, American Utopia, into an impressionistic, sweetly illustrated adult picture book — created in collaboration with the much-loved artist Maira Kalman. 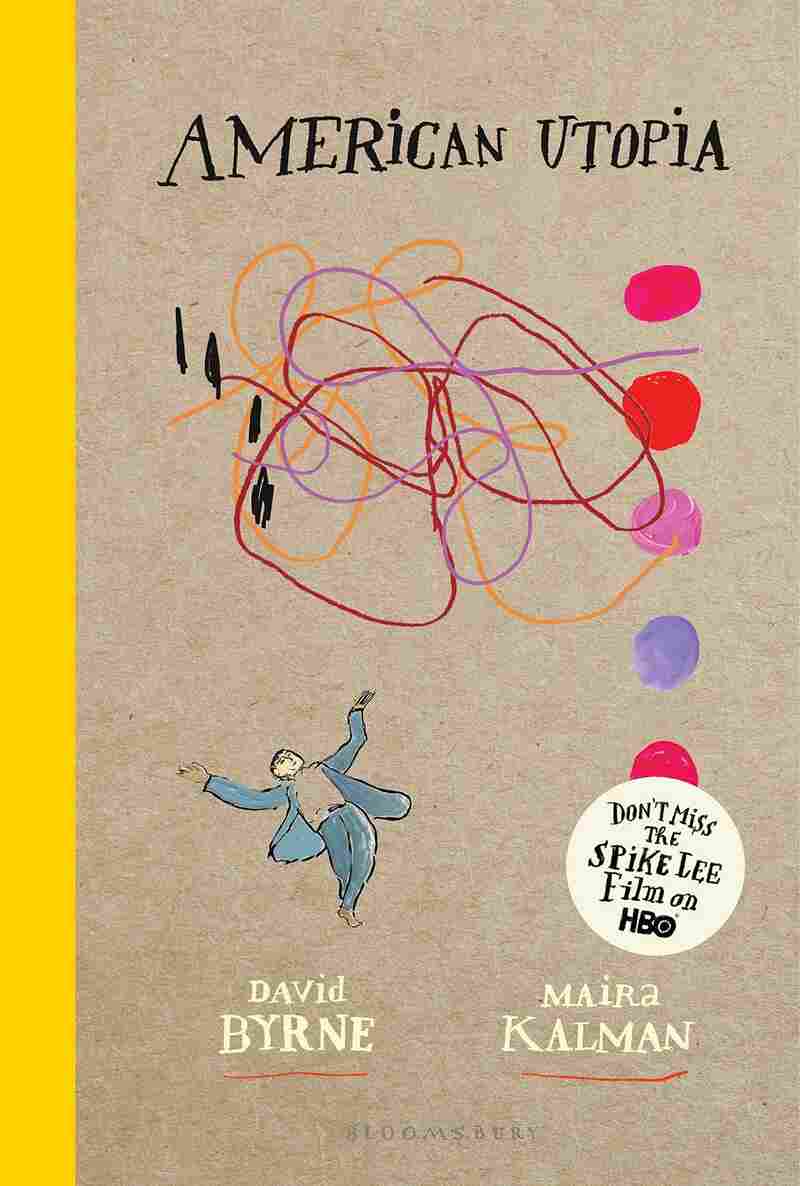 It can only have been a stroke of luck that, together, Kalman and Byrne hit on a form perfect for our attention-frayed, stay-at-home age: a version of a play that, rather than offering the full script with no visuals, offers the staged American Utopia‘s spirit or, at least, what I imagine its spirit must have been. Not having seen the musical, I can only guess — but I can testify, with great pleasure, that the book stands on its own as a soothing and uplifting, if somewhat nebulous, experience of art, as well as an argument for the reincarnation of hope in the American project.

In the spirit of honest criticism, I should note that I have a bias here: I hate reading plays. Yes, even Shakespeare. Dialogue accompanied only by stage directions always strikes me as tragically bony, bereft of both the energy that renders live theater compelling and of the detail that lifts other prose from the page. Byrne, I suspect, might agree. American Utopia contains little of the play’s language; in fact, it contains little language, full stop. Some pages offer only a few words, or a notable place name — Truth or Consequences, New Mexico makes an appearance, as do Bullfrog, Utah and Goofy Ridge, Illinois—or, in one case, the chorus of the Talking Heads hit “Road to Nowhere.” The resulting effect is much more like reading a book-length poem than reading a play, though few poems or poetry collections come filled with charming illustrations of trees, dancers, and party-hatted dogs.

The dogs are a Kalman trademark. Among her most beloved works are her children’s books starring a poetry-writing dog named Max, who often seems slightly lost and has a tendency — he is, after all, a poet — to get his heart broken. Kalman’s pre-existing tendency toward endearing nostalgia suffuses the book, rendering it both sadder and sweeter than the text alone could. A page reading “raise your eyes to the one who loves you” faces an illustration of a couple turned sorrowfully apart; a page reading “here’s the connection to the opposite side” shows another pair of people — lovers? Parent and child? — in an embrace, one covering the other’s ears. The drawings are lightly at odds with Byrne’s words, transforming their plain optimism into a more nuanced appeal. 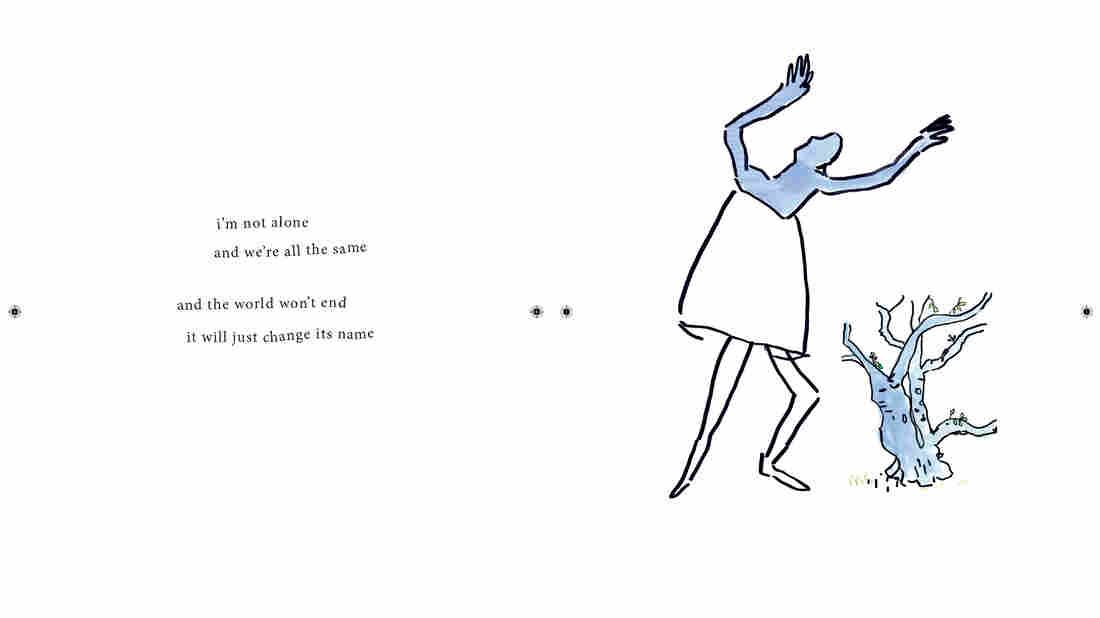 A page from American Utopia.

American Utopia is, fundamentally, appealing in both senses of the word. Byrne and Kalman may not offer a narrative arc, but they have an argument of sorts to make. “[M]y life is in your hands,” Byrne writes — which may seem prescient, given that, thanks to COVID-19, each of our lives quite literally rests in others’ hopefully sanitized hands. But before the pandemic began, Americans were already relying on each other for often-lifesaving support; the legions of medical-bill-related campaigns proliferating on GoFundMe bear sad testimony to that fact. Byrne and Kalman are not here to address the specificities of interdependence, though. Instead, they embark on a whirlwind tour of American place names mixed with friendly questions, Howards End-like exhortations to connect, and reminders that “we’re only tourists in this life” — plus a two-page detour into Dadaism, complete with the poet Hugo Ball’s claim that Dada existed “to remind the world that there are people of independent minds — beyond war and nationalism — who live for different ideals.” American Utopia speaks to Byrne’s own ideals: empathy, curiosity, and meaningful engagement with the country around us. These should not seem like political values, and yet it is no wonder, during this presidency, that when American Utopia was on Broadway, a voter registration team waited in the Hudson Theater’s lobby to sign inspired audience members up.

American Utopia will probably not persuade entrenched partisans to peek out from the hole of their views. But to readers already inclined toward connection, and for those aspiring to “live for different ideals,” it can be a source of both aesthetic pleasure — those illustrations! — and some solace. In a world full of books purporting to explain how we arrived at this fractured, chaotic American moment, there is peace in opening one that attempts neither diagnosis nor prescription. More importantly, though, American Utopia provides a certain companionship in hope. (It would be, for example, a perfect book to flip through while phone-banking.) In part, this may be because it was written and illustrated before the pandemic, but Byrne’s statement that “despite all that has happened / despite all that is still happening / I think there is still possibility” rings truer to me after this summer’s wave of Black Lives Matter protests than it might have a year ago. Our country is ever-evolving; we are very, very far from utopia but, per Byrne, we can still try to work our way there.

Lily Meyer is a writer and translator living in Cincinnati, Ohio.