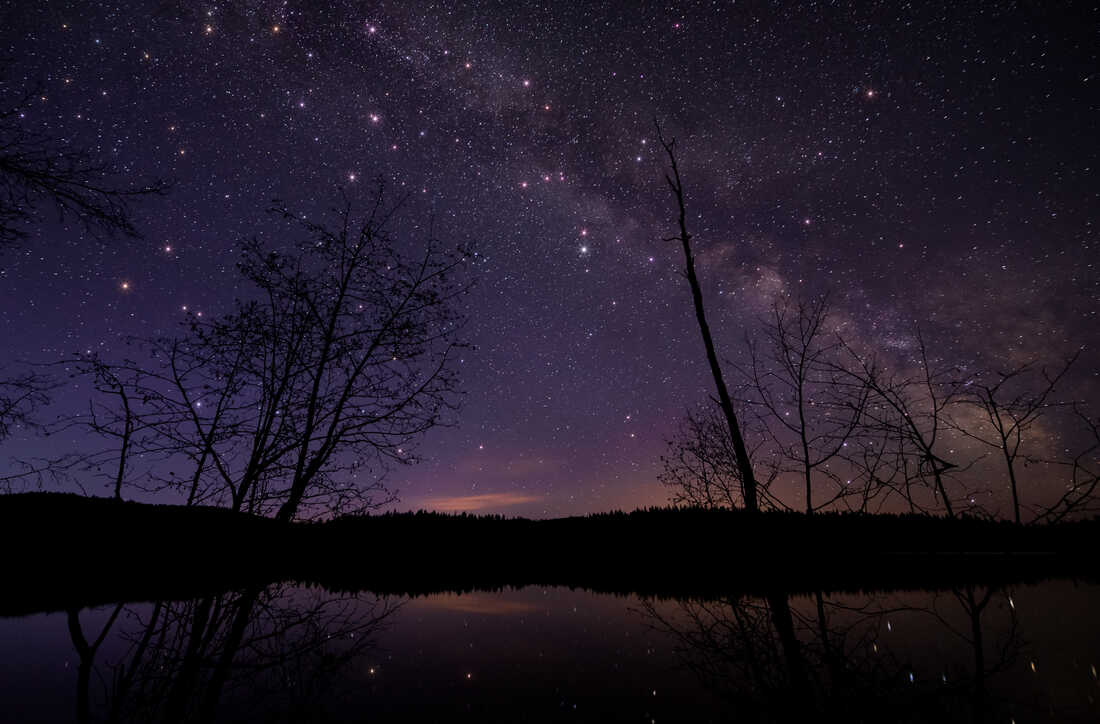 A scenic view of a lake against the sky at night in British Columbia. Earlier this month, a resident of Golden, B.C., woke up to the sound of a crash and found that a meteorite had landed in her bed.

Ruth Hamilton had a rude awakening earlier this month when a large meteorite plunged from space, through her roof and landed in her bed.

The resident of Golden, British Columbia, woke up to the sound of a crash and her dog barking.

“I’ve never been so scared in my life,” Hamilton, 66, told the Canadian Press of the Oct. 3 incident that occurred about 11:35 p.m. “I wasn’t sure what to do so I called 911 and, when I was speaking with the operator, I flipped over my pillow and saw that a rock had slipped between two pillows.”

“I didn’t feel it,” she told CTV News in Vancouver. “It never touched me. I had debris on my face from the drywall, but not a single scratch.”

A police officer arrived on the scene, but suspected the object that landed in Hamilton’s bed was from a nearby construction site.

“He called the [construction site] and they said they hadn’t done a blast but that they had seen an explosion in the sky and, right then and there, we realized it was a meteorite,” she told the Canadian Press.

It turns out that the 2.8-pound space rock, about the size of a small cabbage, was part of a meteor shower identified by Alan Hildebrand, a planetary scientist in the Department of Geoscience at the University of Calgary, and his colleagues. The group said the trajectory of the meteorite that hit Hamilton’s house would have made it visible throughout southeastern British Columbia and central and southern Alberta.

Hamilton said she was in shock after the incident. “The odds of that happening are so small so I’m pretty grateful to be alive,” she said.

Long odds, indeed. “The chances of a meteorite big enough to penetrate a roof and hit a bed are about one and 100 billion per year,” says Peter Brown, a professor and the Canada Research Chair in planetary small bodies.

Brown is appealing to the public in and around Golden “to check their home and business security cameras” for video of the meteor as it streaked across the sky.” He said that it is “vitally important in tracking the origin of this meteor, and by knowing its origin, we’ll have a much better chance at telling a complete story of this incredible astronomical event.”

Ruth Hamilton says she wants to keep the meteorite

After her startling experience, Hamilton handed over the meteorite to scientists to study, but told The New York Times that when they’re through with it, she wants to keep it as a sort of lucky talisman.

But if she ever did decide to sell it, the meteorite might fetch a pretty hefty price, according to Mendy Ouzillou, a member of The Meteoritical Society, who also oversees several enthusiast sites on Facebook and owns Skyfall Meteorites.

Ouzillou tells NPR that a number of factors could determine how valuable a meteorite might be to collectors, but “hitting a car, going through a roof … these meteorites do over time get a mystique about them and increase in value.”

These so-called “hammer stones” that have crashed into something made by humans, are prized, he says.

What a meteorite is made out of can make a big difference, Ouzillou says.

But, as Ouzillou notes, it doesn’t seem like she’s willing to part with her lucky meteorite, anyway. “Not everyone who finds a Picasso in their attic wants to sell it,” he says.