A History Of ‘Pettifogging’ For The Pettifoggers Among You 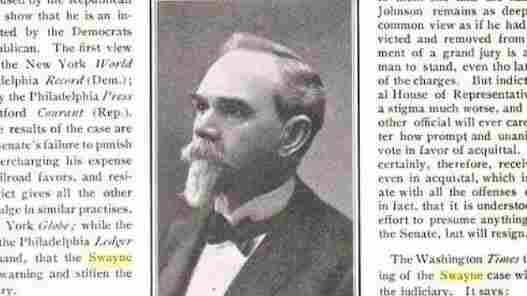 In the Senate on Tuesday, Chief Justice Roberts cited the 1905 impeachment trial of Judge Charles Swayne; this photo of Swayne appeared in the March 11, 1905 issue of The Literary Digest.

According to the Cambridge Dictionary, “Pettifogging people give too much attention to small, unimportant details in a way that shows a limited mind.”

On that note, let’s dive in.

Petty means small or insignificant. A fogger is old slang for a “huckster, a cringing whining beggar.”

In his admonishment of public officials during President Trump’s impeachment proceedings, Chief Justice John Roberts cited the use of “pettifogging” in the 1905 Senate impeachment trial of Florida District Judge Charles Swayne, who was impeached “… for filing false travel vouchers, improper use of private railroad cars, unlawfully imprisoning two attorneys for contempt and living outside of his district.” (After nearly three months, the Senate voted to acquit.)

According to a transcript, the offending word in question was uttered by Swayne’s counsel, the Hon. John M. Thurston. He subsequently apologized.

“I don’t think we need to aspire to that high standard, but I do think those addressing the Senate should remember where they are,” Justice Roberts said, as he urged civil discourse among House impeachment managers and President Trump’s lawyers.

According to etymologist Anatoly Liberman, a professor at the University of Minnesota, there’s a reason pettifogging sounds so much like “petty f***ing.“

“Pettifoggers, shysters, and all kinds of hagglers have humble antecedents and usually live up to their names,” Liberman wrote in the Oxford University Press blog OUPblog.com back in 2010.

The early Modern Dutch form focker was Latinized as foggerus, with -gg- in the middle. German has Focker, Fogger, and Fucker, none having any currency outside dialects. The OED cites them from the Grimms’ multivolume dictionary. (As is known, the OED had to bow to the morals of its time and excluded “unprintable” words, but in the entries where no one would look for them, offensive forms appeared: such is a mention of German fucker, with lower-case f, under fogger, and of windfucker “kestrel.”)

Today, pettifogging isn’t one of those words that, when blurted by a 10-year-old, would make grandma shudder; but it was once a lawyerly dagger.

According to Michael Quinion of World Wide Words, “In the later middle ages, there was a class of lawyers who earned their livings making a great deal of fuss over minor legal cases. About 1560 they came to be called pettifoggers. They often had limited concern for scruples or conscience and the term was deeply contemptuous.”

Another notable usage occurred during a gossipy exchange between the English actor Sir Henry Irving and Judge F. Carroll Brewster, as documented in the 1904 Lancaster Law Review under the headline, “Legal Miscellany: The Real Lawyer and Real Actor.”

“But the man is a mere pettifogging lawyer — a pest to society,” Sir Henry said, upon hearing Judge Brewster berate a fellow public figure.

Like Thurston in 1905, Irving was later compelled to walk back his use of the word.

“You must understand I said a mere ‘pettifogging lawyer’ — not a member of the bar, who, like yourself, is an ornament of society.”