5 Things To Know About Biden’s Quad Summit With Leaders of India, Australia and Japan 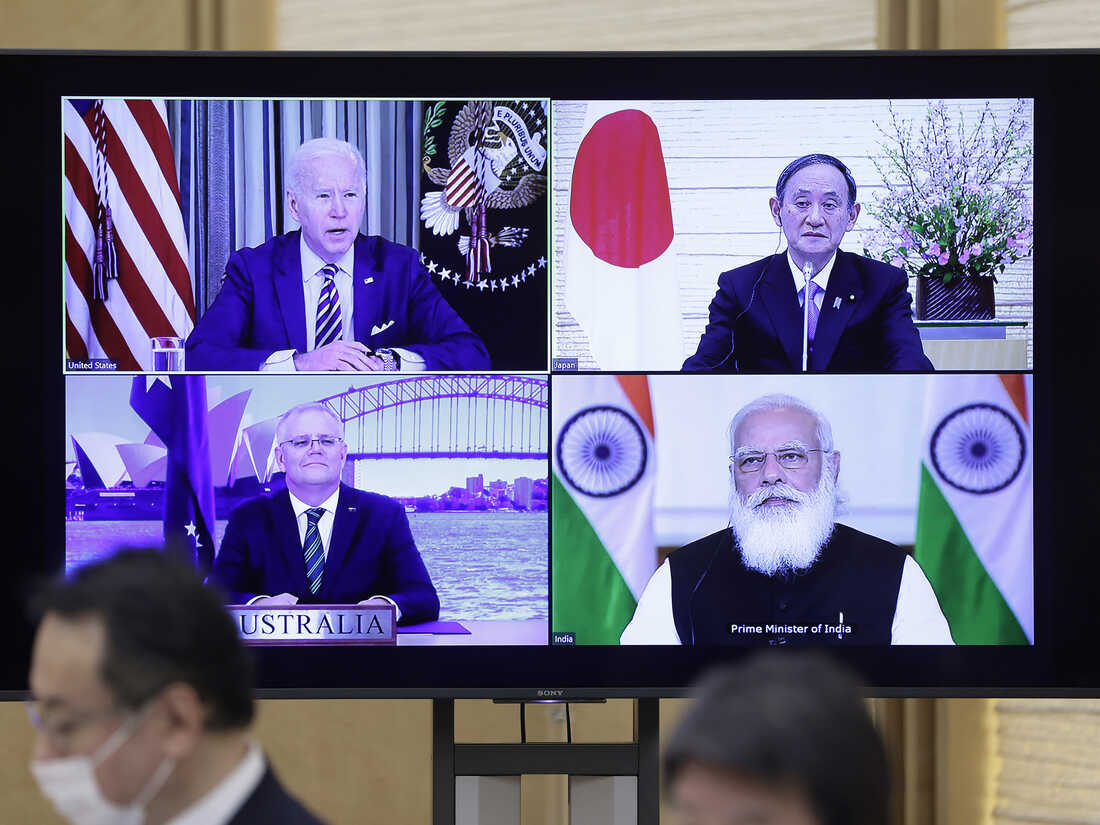 When President Biden hosts the leaders of Japan, Australia and India at the White House on Friday, it will be part of a push, analysts say, to reorient U.S. foreign policy away from long wars and traditional alliances in Europe and instead focus on countering a fast-rising foe: China.

The four leaders will be meeting for the second time this year as part of the Quadrilateral Security Dialogue, or Quad, founded in the aftermath of the 2004 Asian tsunami. In recent years, analysts say the group has emerged as the most important democratic bulwark against China’s burgeoning power.

Here are five things to know about Friday’s meeting.

It’s in person, and that’s a big deal in a pandemic

This is Biden’s first face-to-face summit with all the Quad leaders: Indian Prime Minister Narendra Modi, Australian Prime Minister Scott Morrison and Japanese Prime Minister Yoshihide Suga. For some of them, it’s a rare trip abroad during the pandemic. Modi visited Bangladesh in March, but this is his first trip beyond India’s immediate neighborhood since early 2020.

The Quad leaders met virtually back in March, and issued a joint statement about the importance of “the rule of law [and] freedom of navigation” — references to what all four countries consider as China’s illegitimate claims in the South China Sea. They also agreed to work together to try to boost the production and distribution of COVID-19 vaccines.

“The stranglehold that China’s had on the manufacturing and development of certain technologies impacts all of our countries, so I see a lot of scope for [Quad] cooperation for emerging technologies and opening up new supply chains,” Richard M. Rossow, a senior adviser at the Center for Strategic and International Studies in Washington, recently told reporters.

“I think the in-person Quad summit reflects a political reality that four countries who in a pandemic have seen their own significant levels of turmoil and losses individually but have come together to push capacity-building in times of crisis,” says New Delhi-based strategic affairs expert Shruti Pandalai. “In March, you set out a vision. This is about operationalizing that vision with deliverables.”

One of those deliverables is a ramped-up supply of COVID-19 vaccines for developing countries, which President Biden spoke about Wednesday at a virtual summit on the sidelines of the U.N. General Assembly. “Our Quad partnership with India, Japan, and Australia is on track to help produce at least one billion vaccine doses in India to boost the global supply by the end of 2022,” he said.

Other deliverables may include a possible agreement to build secure semiconductor chip supply chains and fresh promises to reduce carbon emissions and boost clean energy.

Although Friday’s meeting will mark this particular group of leaders’ first time together in the same room, it’s almost sure to be their last: This will likely be Suga’s final overseas trip as Japanese premier. He effectively announced his resignation earlier this month. Parliament will pick his successor on Oct. 4.

The Quad is not a military pact

While the U.S. has defense treaties with Japan and Australia, India is not a U.S. treaty ally, and India has historically resisted joining security alliances.

The Quad countries periodically conduct joint military exercises, but the group isn’t a military alliance. There’s no formal defense pact. It’s more of a loose strategic partnership, with China as the focus — though officials aren’t always explicit about that.

“What we are pursuing is not a monolithic, unified, NATO-type collective security alliance,” says Kunihiko Miyake, a special advisor to Japan’s cabinet and former diplomat. “Rather, it’s a multilayered system, consisting of various groupings and entities.” The Quad and other entities, such as the “Five Eyes” intelligence sharing group and the newly formed AUKUS, share certain values and objectives — one of which is to send a message of deterrence to Beijing.

The Quad is all about China

Broadly, the Quad’s biggest concern is the perceived challenge to maritime security posed by China in the Indo-Pacific region. Beijing has built military installations on reclaimed islands in the South China Sea — a key global waterway and trade route. Quad members see that as a potential threat to free trade and travel.

And all four Quad countries have their own specific gripes with Beijing.

India and China share the world’s longest undemarcated border, where in June 2020, 20 Indian troops were killed in hand-to-hand combat with Chinese soldiers. The clash prompted India to retaliate off the battlefield, banning dozens of Chinese-owned apps, including TikTok.

Australia’s ties with China deteriorated after Canberra called for an investigation into the theory that a Wuhan lab may have leaked the virus responsible for the global COVID-19 pandemic. The two countries have also been mired in trade disputes and exchanged tariffs.

Earlier this month, tensions with China spiked further when Australia announced the AUKUS security pact with the United States and United Kingdom. Under the deal, Australia will receive U.S.-made nuclear-powered submarines — which it will likely use to patrol waters near China.

Japan has its own maritime dispute with China: Both countries lay claim to the Senkaku (as Japan calls them) or Diaoyu Islands (as China calls them) in the East China Sea.

Washington is particularly worried about what China’s maritime claims mean for trade. In 2019, nearly $2 trillion worth of U.S. trade passed through Indo-Pacific waters. Ties with Beijing soured in recent years under former President Donald Trump, who engaged in a tit-for-tat tariff war with Beijing.

But China remains a key trading partner for all the Quad countries. So they need to proceed with caution. And China, unsurprisingly, is not pleased with the Quad’s aims, analysts say.

“China has tried to portray the Quad as a clique that embraces a Cold War zero-sum mentality set on confronting China, as a military alliance that seeks to promote instability in the Indo-Pacific region,” says Bonny Lin, director of the China Power Project at CSIS. “China has also tried to portray the Quad as a group led by the U.S. with the other three actors, essentially, as what China calls ‘U.S. pawns.'”

“I see this as a deterrent to not just a Cold War, but actually to an outbreak of conflict,” Paula J. Dobriansky, a former U.S. undersecretary of state now at the Atlantic Council, told reporters. “I think that the intent is really to provide a kind of counterweight… a kind of collective security arrangement and a type of deterrent to ensure that the types of conflicts that we have witnessed do not get out of control.”

The Quad is also about climate change — and Afghanistan

India is a big focus of those talks. It’s the world’s third-largest carbon emitter, behind China and the U.S., but is expected to account for the largest share of global energy demand growth through 2050. The U.S. wants to encourage India to eschew coal in favor of cleaner technology. To that end, Biden’s special envoy for climate, John Kerry, visited India for talks earlier this month.

The timing of the Quad summit, right after the U.S.’s chaotic pullout from Afghanistan, is also designed to send a message about Biden’s new foreign policy priorities, analysts say. When Biden spoke at the United Nations General Assembly this week, he said it was the first time in 20 years that the U.S. is not at war.

But some Quad members, particularly India, are now worried about China’s influence in Afghanistan. India fears Afghanistan may become another link in China’s Belt and Road Initiative. India is not part of that global infrastructure network, but its archrival Pakistan is — and there are fears that the world’s largest democracy may be increasingly encircled by Chinese projects.

The Quad’s purpose is still evolving

The Quad began as a relief group after the 2004 Asian earthquake and tsunami killed hundreds of thousands of people across the Indo-Pacific. But in recent years, it’s taken on increased significance as a counterweight to China’s growing power in the region.

“Over the last decade, China has become much more powerful, much stronger, and it has also become much more belligerent,” says Rajeswari Pillai Rajagopalan, director of the Centre for Security, Strategy and Technology at the Observer Research Foundation in New Delhi. “All of this Chinese behavior has pushed many more countries to come together.”

Much of the thinking for the Quad originally came from former Japanese Prime Minister Shinzo Abe during his first administration in 2007. But there are competing visions of what the group should do.

Yoshihide Soeya, a professor emeritus at Keio University in Tokyo, says the dominant vision is of the U.S. and Japan leading a coalition to contain or counterbalance China. A less popular interpretation is that the Quad is a collaboration of Asia’s “middle powers” to promote shared interests, such as fighting COVID and climate change.

Soeya sees the dominant interpretation gaining ground as the Quad evolves, but disagrees with it.

“The more you emphasize the China threat, the more you become dependent on the U.S,” he says. And “if this is the only thing which Japan is interested in, then I think our so-called ‘strategic autonomy’ will be lost.”

The Quad’s various goals echo the Biden administration’s stated intention to collaborate with China where it can — such as on climate change — compete where it should, such as in new technologies, and confront China where it must, over Beijing’s perceived aggression toward its neighbors.

The problem, critics argue, is that China says it will not collaborate with anyone it considers hostile. And China considers the Quad to be aimed at containing its rise — so the four Quad members will have to tread lightly.

NPR’s Michele Kelemen contributed to this story from Washington, D.C.