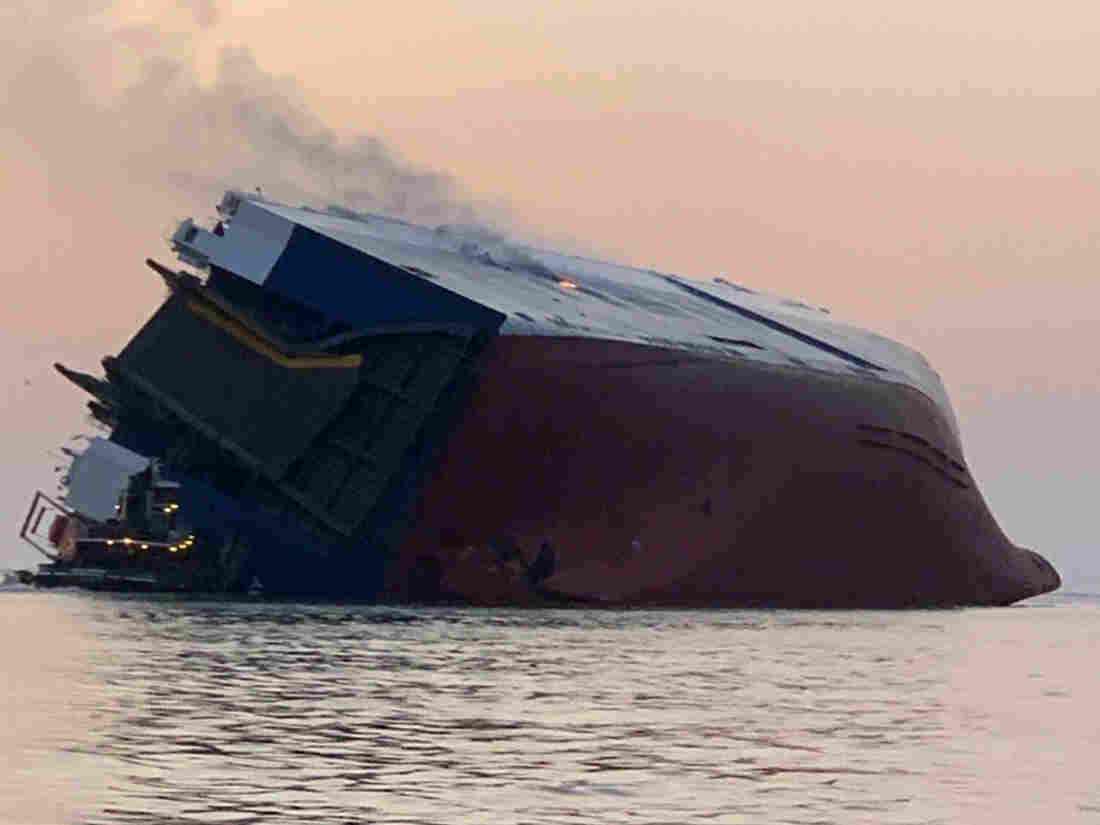 Coast Guard crews and port partners respond to an overturned cargo vessel with a fire on board Sunday, in St. Simons Sound, Ga.

Rescue crews are searching for four crew members of a cargo ship that overturned in the early hours of Sunday morning off the coast of Brunswick, Ga., approximately 80 miles south of Savannah.

There were 23 crew members and a pilot aboard the Golden Ray when the 656-foot carrier became disabled in St. Simons Sound, according to the Coast Guard.

Twenty people on the vessel were rescued.

Capt. John Reed, Commander of Coast Guard Sector Charleston, told reporters at a Sunday afternoon press conference that several people were rescued from the vessel “at multiple points.” Then rescue operations were suspended due to safety concerns related to a fire on the ship.

“As smoke and flames began to appear our crews … assessed the situation was too risky to further go inside the vessel to attempt to locate the four individuals who remain missing at this time,” Reed said.

Coast Guard officials said rescue missions will resume once it’s safe to do so.

“Once salvage professionals have determined the vessel to be stable, we will identify the best option to continue our rescue efforts for the four crew members who remain onboard,” Reed said.

At about 2 a.m. Sunday, Coast Guard officials in Charleston were notified a ship was disabled and “listing heavy” to its port side as it was about to make a turn to depart the harbor.

Officials are still working to determine the cause of the incident, and say an emergency safety zone has been established in St. Simons Sound. Other ships are not permitted within a half mile of the Golden Ray, according to a Coast Guard media advisory.

The Atlanta Journal-Constitution reports the ship is on its side and visible from the pier on St. Simons Island.

There do not appear to be any environmental hazards with the cargo vessel being on its side in water, according to Cmdr. Norm Witt, who oversees the Coast Guard’s Marine Safety Unit Savannah.

“Currently, I would say there is no active release of pollution,” Witt told reporters.

As a precaution, though, Witt said pollution mitigation strategies have been activated.